If You Can't Beat'em, Bleed'em Dry 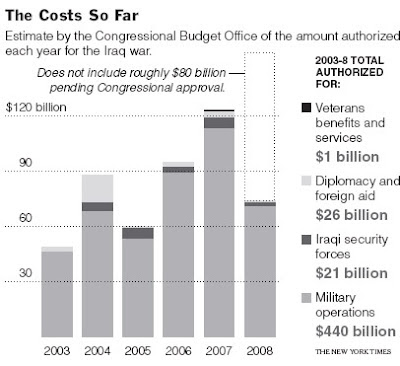 America's trained chimp, George w. Bush, assured his people that he didn't need 300,000 soldiers to conquer Iraq and fired his top military man, General Shinseki. He assured his people the whole thing would cost $50-billion, $60-billion tops and fired his first economic advisor, Lawrence B. Lindsey who had the audacity to claim the war would cost $100-billion to $200-billion annually.

Then there was Cheney who promised that American troops would be greeted as liberators and Rumsfeld who said the whole thing would take six weeks, six months at the outside.

America has the mightiest military machine on the planet, perfect at rolling up a battered and disabled Iraqi army in 2003, and utterly useless at controlling the country ever since. There is simply nothing quite so pathetic looking as a main battle tank without another tank to shoot.

The conquest of Iraq was supposed to be an object lesson to little, unfriendly nations around the world of what happens when America plays hardball. They watched and learned but the lesson played out wasn't the one America wanted to send.

Mainstreet America may believe that the "surge" is working and it is until you factor in the dormant Shiite militias and Sunni resistance. They've taken a break from slaughtering each other and passing American troops but they're still there and they're still ready to go and there's no reason to think they won't be heard from again - soon.
The success of the surge has been measured in body counts, a bit of foolishness that America hasn't been able to shake since Viet Nam. If you want to measure the surge you need to look at other signs - the lack of electricity, water, sanitation, even gasoline; the lack of meaningful political progress; the corruption of the Iraqi government and the infiltration of its security services. If you leave the body counts out of it, this surge has accomplished precisely nothing.

Another object lesson from the Iraq war is how astonishingly ineffecient and profligate America is at this sort of thing. It's now spending roughly $12-billion each month on direct operational costs alone for its war. That's money it doesn't have. That's money it has to borrow - on foreign markets, money that will be bequeathed in the form of interest-bearing debt to America's youth and their children.

What happens if Asia and Europe decide they're not interested in funding America's wars any longer? Better yet, what happens if they decide they will keep lending money but they want the IOUs in Euros, not American greenbacks?

When you fight an unwinnable, war without end, entirely on borrowed money that you squander like a manic-depressive on crack, you're playing a mug's game. It's something only a trained chimp would consider worthwhile. Happy legacy, President Numbnuts.
Posted by The Mound of Sound at 9:05 AM

Where did you get the idea that he is a trained chimp? He is a plain wild chimp and lives by the law of jungle which he does not fully understand either.