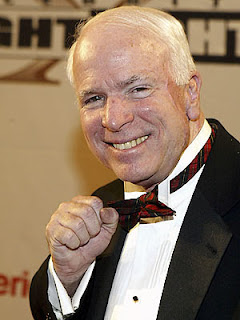 They spent the better part of a century and a half warning us that "the South will rise again" and the decent world didn't listen. Yet since the days of Lyndon Johnston the South has indeed arisen and a lot of the ugliness it once championed has been resurrected.

Under George w. Bush, in particular, racism and bigotry have crept back. Even America's media, wittingly or otherwise, are getting into the act. Look at the way they're focusing on Barack Obama and Reverend Jeremiah Wright. Then look at the way they're abjectly ignoring those other preachers - the white boys - and their political allies.

This article is from Alternet. It's long but it deserves to be read:


Rudy Giuliani's priest has been accused in grand jury proceedings of molesting several children and covering up the molestation of others. Giuliani would not disavow him on the campaign trail and still works with him.

Mitt Romney was part of a church that did not view black Americans as equals and actively discriminated against them. He stayed with that church all the way into his early thirties, until they were finally forced to change their policies to come into compliance with civil rights legislation. Romney never disavowed his church back then or now. He said he was proud of the faith of his fathers.

Jerry Falwell said America had 9/11 coming because we tolerated gays, feminists and liberals. It was our fault. Our chickens had come home to roost, if you will. John McCain proudly received his support and even spoke at his university's commencement.

Reverend John Hagee has called the Catholic Church the "Great Whore." He has said that the Anti-Christ will rise out of the European Union (of course the Anti-Christ will also be Jewish). He has said all Muslims are trained to kill and will be part of the devil's army when Armageddon comes (which he hopes is soon). John McCain continues to say he is proud of Reverend Hagee's endorsement.

Reverend Rod Parsley believes America was founded to destroy Islam. Since this is such an outlandish claim, I have to add for the record, that he is not kidding. Reverend Parsley says Islam is an "anti-Christ religion" brought down from a "demon spirit." Of course, we are in a war against all Muslims, including presumably Muslim-Americans. Buts since Parsley believes this is a Christian nation and that it should be run as a theocracy, he is not very concerned what Muslim-Americans think.

What separates all of these outrageous preachers from Barack Obama's? You guessed it. They're white and Reverend Jeremiah Wright is not. If it's not racism that's causing the disparity in media treatment of these preachers, then what is it?

I'm willing to listen to other possible explanations. And I am inclined to believe that the people these preachers go after are more important than the race of the preacher. It's one thing to go after gays, liberals and Muslims - that seems to be perfectly acceptable in America - it's another to accuse white folks of not living up to their ideals.

I think there is another factor at play as well. The media is deathly afraid of calling out preachers of any stripe for insane propaganda from the pulpits for fear that they will be labeled as anti-Christian. But criticism of Rev. Wright falls into their comfort zone. It's easy to blame him for being anti-American because he criticizes American foreign and domestic policy.

If Rev. Wright had preached about discriminating against gay Americans or Muslims, there probably would not have been any outcry at all. That falls into the category of "respect their hateful opinions because they cloak themselves in the church."

But one thing is indisputable - the enormous disparity in how the media has covered these white preachers as opposed to Rev. Wright. Have you ever even heard of Rod Parsley? As you can see from what I listed above, all of these white preachers have said and done the most outlandish and offensive things you can imagine - and hardly a peep.

If the disparity in coverage isn't racist, then what is it?"

I'm definitely getting the impression that Barack is getting Swift Boated. This whole thing with his Pastor should be a non-issue.

He is getting Swift Boated and it's working, particularly for Hillary. Beyond that, however, is the question of McCain's newfound friends. This is the guy who denounced these types in 2000 as agents of intolerance. Now he can't get close enough to them. If the Democrats self-destruct, and they seem headed that way, McCain will be a wild card.

Imus got fired for an off-color joke.
Obama was outraged and supported the Imus firing.
Obama's pastor of 20 odd years is certifiable . . . with ties to Liberation Theology. If a white pastor had said something similar about black folks it would be the end of the world.
Wright is a family friend, advisor and mentor . . . it takes Obama 20 years to figure out the guy has problems . . . not I guy I would want in the Oval Office.
I know all you Globalist/Socialists are disappointed, but Obama is TOAST!!! And he did it all himself!!!

Oldschool, friend you suffer from delusions and lot of wishful thinking. World has passed you by and you're stuck in the oldschool and come across as a broken record.

This controversy will only help Obama. Firstly, because people will see the hypocracy right through. Secondly he gave an extraordinary speech and converted many to his side including me. Thirdly upto recently he was accused of being Muslim - not that there is anything wrong being Muslim. Now neo-con media goes on and on about his faith - Christianity - and that his pastor made some controversial remarks. He stands only to benefit from it.

Since when is "Liberation Theology" a problem?

As for contemporary US racism, it doesn't surprise me. 90 years ago, the vast majority of the "white" population were basically genocidal racists and it takes a long time to get over something like that. Sort of like child abuse - it gets passed from generation to generation. (And before anyone accuses me of the usual cliche of Anti-Americanism, just let me state that 90 years ago the vast majority of "white" Canadians were also genocidal racists too, but were just too gentile to engage in lynchings.