She's Just Another Chump - Get Rid of Her 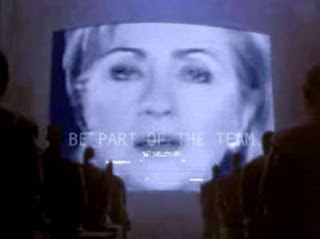 She's played the race card more times than I can recall, she's played dirtball fear politics, she's even endorsed John McCain over her Democratic opponent, Barack Obama. Just where does she get off?

This guttersnipe held forth that only she and John McCain - and not Barack Obama - were qualified to be commander in chief of America. In pinball, that's when the "tilt" buzzer comes on.

She's experienced? Excuse me but what wars did she actually wage, what peace did she conclude? Hmmm. Maybe none, nada, zip? She was (and remarkably is) the wife of Bill, former two time (no pun intended) president of the United States of America.

If Hillary will put herself first without the remotest regard for the fortunes of the Democratic Party and in abject furtherance of the interests of the Republican Party, how can anyone ever trust her to put America's interests ahead of her own? Simple answer - you would have to be a fool to trust Hillary R. Clinton to ever do the right thing if it conflicted with her self-interest.

From what I've seen, I'd vote for McCain before I'd ever think of voting for Hillary Rodham Clinton. At least with McCain you know what you're getting. She has poisoned the Democratic nomination race and, I expect, she wouldn't hesitate to do the same thing to her country if America was ever unfortunate enough to hand her the reins.
Posted by The Mound of Sound at 8:24 PM

That is your opinion that is actually contraduicted by fact. Hillary Clinton is on record to have helped settle peace in Northern Ireland.

You're free to write anything you want, but at least your opinions should confer with reality.
-scott
thescottross.blogspot.com

Oh, and by the way Scottie. Since Hillary tamed the IRA, please, oh please, enlighten us on that one. I can't wait. What's that I hear? I think it's your record skipping.

Sorry Scott, don't mean to pile on but this is from the Washington Post:

Hillary is making a lot more of her Northern Ireland role on the campaign trail than she did in her memoir "Living History." As the Boston Globe recently noted, her stories of bringing Protestant and Catholic women together have become more dramatic with each retelling. The claim that she brought Catholics and Protestants together "for the first time" seems dubious. This would not be the first time that she has mixed up her chronology.

Jean Chretien, in an interview in Toronto, said Hillary was very smart and did indeed sit in on meetings with him.

By the way - don't you think the delegates and votes are a little close for her to bow out - a little premature. She does owe it to her supporters and donators to give it her all.

The phone ad - I didn't find it scary. No fires/bombs/mushroom cloud. There are other events that cause a crisis - i.e. Katrina.

Talk about over hype just because someone wants Obama in.

By the way, Hillary is doing Obama a favour if he should win - she's nothing to what the Republicans will do. He better toughen up.

I am not going to even say anything about what u wrote, other than it is a swift boat type of attack on hillary, what amazes me is how liblogs could allow such misinformation on their web site....I am a true liberal, and Hilary's policies and that of her husband conforms to our view of what a good and sound economic policy should be...I stongly suggest politely to you that you join other web sites, (like a republican one), for your comments parrallel their views on reality, and to put it mildly, you could be a great mouth piece for the harper conservatives.

Okay, where to begin. No one that I'm aware of is saying that HRC isn't bright. Of course she is. So, I think, is the guy who was made editor of the Harvard Law Review, her Democratic opponent.

I certainly have never suggested that she should bow out of the nomination race after winning in Texas and Ohio. Of course not. So I don't know where you're getting that from but it isn't here.

Swift Boat attack? Please, get real. I'm glad you're a "true liberal" and if you read the views I've expressed on this blog you'll know that I am very much a true liberal also.

My complaint with Hillary Clinton is the "scorched earth" policy she's taken in her campaign - even the New York Times has taken her to task for that. She's doing a great deal of good for the Republicans and an equal measure of potential harm to the Democrats and - that's simply wrong.

I don't know on what basis you've concluded that I disagree with HRC's policies whether that's her policies today or what they were six months ago or what they may be six months from now. She's been a bit wobbly on Iraq but that's for the American voters to sort out.

It's not Hillary's policies that have drawn my criticism but her conduct.

Now to suggest that I would bge a good mouthpiece for the Harper conservatives, here's a reality check for you and, believe me, you need it. Go to the search button at the top of this blog and type in "Harper, Harpo, SHarper, Furious Leader" and read what I've written about him almost every day for the past two years. That's a truly pathetic criticism.

So she might not have been the first to bring them together, the fact is she helped settle peace in the region, your own quote doesn't dispell that fact.

The point that you call her full of crap illustrates your fanaticism, because it appears you have no factual basis.

Your writing is similar to Altavistagoogle, a blog during the Liberal Leadership that writes junk knowing its junk but just to get people's attention.

I imagine next you're gonna start playing the race card, am I right?

Would you all anon get off your emotional tirades and debate instead of behaving like monkeys throwing shit - this blog is for legitimate discussion not childlike insults. If you can't fit in here, then go to the MTV sites and vent there. Christ.

Good Blog by the way - I think it's to to have some critical thinking around here. At least that's what journalism is supposed ot be about.

I helped settle peace in Ireland too when I persuaded my kids' Irish nanny that she should tear down the walls and settle her feud with the Catholic Irish nannies. Yippee for me.

Let's get realistic here. Reluctant as I am to give him glory, it was Tony Blair and Gerry Adams who settled the Irish problem and for Hillary to even claim credit for her astonishingly peripheral role is remarkable. Just what wing of Sinn Fein did she tame anyway?

Before too long Hillary's gonna be claiming that she, not the Goracle, created the internet.

Nice to see so many lefties finally clueing in to what the the Clintons are all about.

As an aside, have you noticed that Obama is now stumbling in light of Hillary's scorched earth campaign?

Samantha Power forced to resign over a comment in the UK paper. Austen Goolsbee trying to reassure Brodie about Obama and NAFTA.

It remains to be seen how Barack handles it. He may end up being the Democrats' version of Stephane Dion.

I read the Powers' interview in The Scotsman. Whew, talk about venting!

From what I've seen and read, Obama is off-balance. He doesn't know whether to simply take it or go after her himself, do the Republicans' job and possibly ruin both their chances.

Tough call. She's a lot more vulnerable than people think. For all her "experience" claims she doesn't want folks looking into that experience too closely. That's why the Clinton library is sitting on boxes of her documents and why she won't release her tax returns.

I'm not so sure that Obama is the real threat to Hillary. I think that any dirt on her is going to wait until the Repugs get their chance at her, if they do. I'd love to know what they've got on her - if anything.

Hillary is playing high-stakes electioneering. She doesn't have much to lose because if Obama wins, her career is pretty much washed up. On the other hand, he's young and has to weigh his position in terms of running again in the next election, especially if Hillary wins the nomination and gets wiped out by McCain.

Yikes, I just realized, this may be the last election for my generation, the newly emerging geezers. After this it will be Obama's generation's turn. Hillary and the rest of us boomers will be put out to pasture.

MOS .... are obscenties necessary when you are blogging about Hillary? It is one thing to debate what she has on her agenda or how she behaves but gutter ridicule doesn't make you look better than she. There is nothing wrong with expressing your dislike but you are coming across as a bit more than dislike. I've mentioned this before and other people are picking it up as well...their comments. Sometimes you sound like those babies in the house of parliment arguing like ten year olds fighting over a cookie and I think you are more socially educated than that. Cheers

"He doesn't know whether to simply take it or go after her himself, do the Republicans' job and possibly ruin both their chances."

Switch Barack with Dion and Hillary with Iggy/Rae. Then you get the same dilemma.

Note that Mark Penn has told Hillary to up the ante. It worked for her in Ohio and Texas. Just.

Tom Daschle's advice to Obama is simple. Obama can't wait for
2012, otherwise he would have sat out 2008. Yes, he is the odds on favourite, but a second chance for a Democratic contender is difficult to say the least. Furthermore, Obama will have to serve as Hillary's running mate. Rejecting this notion will mean continuing to publicly foster the divide within the Democrats.

Two factions of the Democrats, none that has any love for the other. It has become winner take all. Reminds me of the Grits today, except that it is not about ideology but that a certain person is much better than the other.

You might be right, Shroom. I had thought a Clinton/Obama ticket might work until I began learning about the loathing each has for the other. It's said to be worse than Kennedy/Johnston. I'd like to know how that idea would be welcomed by the American voting public. Maybe a woman AND a black might be too much for them. Whichever of them runs for the Dems, have no doubt that eiter sexism or racism will play a role.