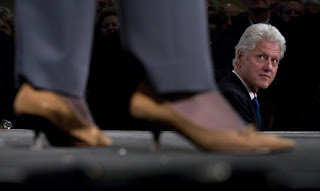 Hillary Clinton isn't having a good time of it lately. After running a pretty effective smear job on her rival, Barack Obama, to the enternal gratitude of Republican John McCain, Hillary has been pulled back into the realm of reality, her own reality, and she's not liking it.

To use the phrase of the judge at the McCartney divorce hearing about Heather Mills, Hillary has "over-egged the pudding." That's a polite way of saying she's been a bit carried away with her many claims to fame.

To hear her tell it, she was instrumental in helping her husband, the Big Dog, cope with the many crises he faced during his terms as president. Why she must've been right there by his side, guiding his hand. Except she wasn't. It turns out that some 11,000 pages of her record - pried loose by a Republican Freedom of Information proceeding - shows a considerably different picture to that painted by Hillary. Often she was on holiday at critical moments or having a tea social somewhere else.

Now Hillary is up against the "Phantom Sniper." This little, self-serving figment of Hillary's imagination came up in relation to her 1996 visit to Bosnia. Just last week Hillary told everyone how she had to brave sniper fire when she arrived at Tuzla airport:

"I remember landing under sniper fire. There was supposed to be some kind of a greeting ceremony at the airport, but instead we just ran with our heads down to get into the vehicles to get to our base," she said in a speech last Monday.

Brave stuff indeed, presidential even - except it didn't happen. She just made it up. Also along on that junket was the comedian Sinbad who said the greatest crisis they faced was figuring out where to eat.

Caught with her drawers down and unable to claim the dog ate her homework, Hillary did the only thing she could do, she says she "misspoke":

"I say a lot of things — millions of words a day — so if I misspoke, that was just a misstatement."

Yes, Mrs. Clinton, you do say a lot of things - a lot about your Democratic rival, Mr. Obama, and a lot about yourself. Maybe if you focused on saying less - maybe by just sticking to things that are true - you would do yourself a lot of good.

A weekend poll found that 60% of American voters said that McCain and Obama were believable. 57% said that Clinton was not believable. This is a candidate with a serious credibility problem and it's all of her own making.
Posted by The Mound of Sound at 9:03 AM

In the meantime Bill is busy gawking at someone's crotch and it sure is not Hillary's.

I remember this kind of stuff regularly happening during the 8 years that Bill Clinton was in the whitehouse. The problem was there was no youtube, and nobody in the media was interested in exposing Bill's fibs.

For one really blatent example... Bill Clinton declared that he had vivid memories of church burnings in Arkansas when he was growing up.

It NEVER happened. It's totally fictional. There were even people willing to pay a thousand dollars for proof of Clinton's vivid memories of church burnings while he was growing up. Nobody ever was able to collect, because it never happened.

But that fib like so many others was simply overlooked, or diligently reported as true by the MSM.