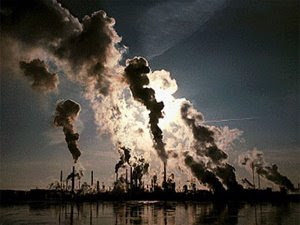 Trust it to come from the National Spot. The Spot reprinted a "special report" that appeared in the Financial Spot from Big Tobacco, Big Oil shill Fred Singer entitled "The Case Against Global Warming." It's part of the swill coming out of this week's International Conference on Climate Change in New York sponsored by the Heartland Institute which doesn't sound remotely like what it is, a front group for the fossil fuel industry.

Singer posits all the old garbage about causes of global warming. Naturally the Spot carefully ensures that Singer's background is nowhere to be found in his unchallenged and astonishingly informative scientific assessment.

Singer's new band, that calls itself the Non-Governmental International Panel on Climate Change (AKA the International Fossil Fuel Industry Panel on Climate Change) issued a bold open letter to UN Secretary General Bam urging that the world abandon the futile fight against greenhouse gas emissions and instead focus on adapting to the inevitable warming. The letter was signed by a host of impressive sounding folks, many of whom are directly linked to the fossil fuel industry, the denialist movement or far right wing think tanks including these jokers:

Franco Battaglia, Italy(professor of environmental chemistry at the University of Modena)

Robert Carter, Australia(”Professor Carter, whose background is in marine geology, appears to have little, if any, standing in the Australian climate science community;” well known climate change skeptic)

Richard Courtney, UK(Technical Editor for CoalTrans International (journal of the international coal trading industry), was a Senior Material Scientist of the National Coal Board and a Science and Technology spokesman of the British Association of Colliery Management)

Fred Goldberg, Sweden(associate professor at the Royal School of Technology in Stockholm)

Craig Idso, US(founder and chairman of the board of the Center for the Study of Carbon Dioxide and Global Change, funded by Western Fuels and Exxon Mobil)

Madhav Khandekar, Canada(retired Environment Canada meteorologist, on the scientific advisory board of Friends of Science, published in Energy & Environment)

William Kininmonth, Australia(past head of head of Australia’s Bureau of Meteorology’s National Climate Centre, known Australian climate change skeptic; listed as “Director of the Australasian Climate Research Institute,” but the Institute is listed as simply a trading name for “Kininmonth, William Robert”, and is based at his private residence)

Tom Segalstadt, Norway(head of the Geological Museum within the Natural History Museum of the University of Oslo, IPCC reviewer)

S. Fred Singer, US(Whom we also all know; former space scientist and government scientific administrator, runs the Science and Environmental Policy Project and has been connected with numerous conservative think tanks, including Cato, American Enterprise Institute, and of course, the tobacco industry)

Anton Uriarte, Spain(professor of Physical Geography at the University of the Basque Country

C'mon. The Association of German Coal Producers, Big Tobacco, the American Enterprise Institute, one-man "Institutes", Friends of Science, climate change outfits funded by Exxon, the British Association of Colliery Management? None of these connections, of course, are relevant to the National Spot. They would only confuse its readers.
Posted by The Mound of Sound at 3:37 PM

Doesn't that just make your stomach turn? It's time we voted the Greens in and shook up the "royal boils" in the House of Parliment in Ottawa. If I live to see the Greens make it into the House with a majority, I'd rub my hands with glee. Cheers

I think what's disgusting is a newspaper that doesn't reveal this information to its readers. The National Post is a goddamned disgrace.

Even as rags go, it's genuinely atrocious.

I would think if the Greens were the new government in Canada, this news paper would go....don't you think? Cheers

Heartland is hardly a "front group" for anyone.

The Heartland Institute receives about 16% of its total income from corporations, the rest comes from individuals and foundations. No one corporation has EVER contributed more than 5% of Heartland’s annual budget. All energy companies COMBINED in 2007 gave less than 5% of the organization’s total budget. ExxonMobil hasn’t contributed since 2006. If funding determines a think tank’s perspective, then you might expect Heartland to be 95% in favor of global warming alarmism!