About that Blind Spot. Don't Worry, Be Happy. 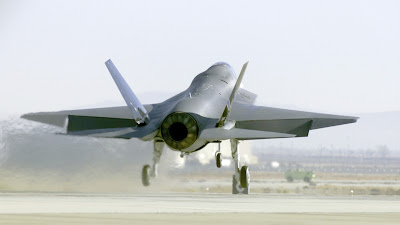 Lockheed's troubled F-35 is attracting criticism due to pilot complaints that they can't see what's behind them.   They can't "check their six" man, bummer.

Who cares?  If you're piloting an F-35 and there is something behind you that's a mortal threat, being able to see it isn't going to be much help.   Chances are very good that by the time you see the threat your fate is already sealed.  It's over.

And there's another problem.   That stealth thing that's supposed to make the F-35 invincible?   Well it's "frontal aspect" stealth.  The airplane isn't particularly stealthy at all when looked at from above or beneath or from the sides or from behind.   Then it's "Hey, I'm Over Here".

Don't forget, the F-35 is purpose built to be a light attack bomber.  Straight to the target, drop the bomb, straight out.  In other words, it's intended to spend its combat life in the other guy's airspace but only for getting in and getting right back out again.   With the advantage of surprise its chances of getting to the target are considerably better than its chances of getting back out again safely after that surprise is lost.

It's bad enough navigating Vancouver traffic in my car, which has really lousy rear visibility. And no one (in theory) is potentially trying to kill me. Our military pilots deserve better tools than this.

I thought F35 is history. Has Harper Govt not indicated that they’re not buying F35? U.S has cancelled any further order of F35, I believe. Maybe Lockheed Martin has made a big political contribution to Harper and he has changed his mind.

ET, if you're going into aerial combat today that pretty much means you'll be facing some pretty capable, sophisticated opposition. The F-35 depends on not being found something that requires a combination of surprise and stealth. It's supposed to hit the enemy before they know it's there and be safely on its way before they can react.

No, LD, the F-35 remains very much in the running, for now at least. I think Harper and MacKay would still like to buy it if only for political points. I don't know where you got the idea that the U.S. had cancelled the project. It could be killed in the future but it does have that "too big to fail" cachet.

This is just more evidence that we have reached the cusp where too many compromises must be made to keep a human safely aloft in a state of the art fighter/bomber jet.

There is no plausible scenario where the manned f35 would be markedly superior to currently flying advanced manned fighters. Often, you'd have to say the opposite.

There is every reason to believe that the f35 would be fatally weakened in any fight against advanced drones/missiles.

America sort of has to build at least some of these things now. But every US ally needs to read the writing on the wall with regards to F35 and limit the budgetary and strategic military damage of this fossil.

Hi Chris. I've read the "other" side already has tactics to neutralize the F-35.

First of all you'll know something is up when the F-35's anything-but-stealthy tankers and AWACS show up. The F-35 is range limited, especially in stealth mode where it can't carry drop tanks. Because it has no external fuel and lacks supercruise, it can only go fast on fuel-guzzling afterburner. That means it has to drag its support aircraft forward so it can top up before the run into its target.

This gives the defenders a rough idea of where the stealth bombers will be coming from which allows them to basically 'fix' the attackers with ground radar. The defending interceptors, meanwhile, run flanking sweeps, using their onboard radars to detect the intruders from their non-stealthy aspects.

At this point the defenders attack from the flanks, forcing the bombers to maneuvre defensively which negates their stealth entirely. After that it's a matter of butchery.

Stealth is actually better suited to defenders than attackers but only if it can be used in an airframe that doesn't have to sacrifice speed, agility, range and payload.

Mound, you're probably right. On NBC evening news there was an item that as a result of budget fight and ‘sequestration’ Pentagon will cancel any further purchase of F-3. Maybe I misunderstood.

Then there's the thermal signature, radio emissions signature, etc from the aircraft. Radar absorbant is only one dimension of the stealthness of an aircraft. That fat motor generates tremendous amounts of heat that it spits out in a long tail out the back. And I'm no engineer, but I often wonder about the active electromagnetic signature of the thing based on emissions from onboard systems. Everythign on that plane is electric from the fancy yet non-functional helmet, to the flight controls, to the digital instrumention.

Absolutely, Boris. That ginormous hot section is a problem that can't be masked. It all but rules out using the F-35 in ground support where it would be massively vulnerable to shoulder-fired missiles.

As for emissions the F-35 avionics, as I understand them, are supposed to be passive, relying on data streamed form electronics warfare support aircraft at the forward edge. This raises another vulnerability.

It's said the Chinese are developing systems to exploit these electronic windows now standard in stealth aircraft and drones. The idea is for the defenders to stream their own data in through these windows to blind the sensors, corrupt the code and potentially either bring the vehicle down or commandeer it.