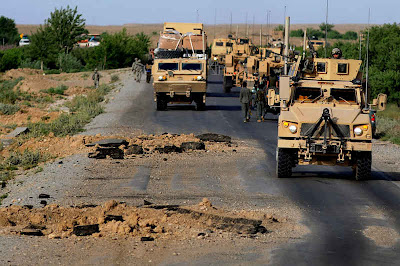 America, land of the formerly free and home of the lamentably broke.

A recent Harvard study estimated the costs of America's wars in Afghanistan and Iraq at at least $4-trillion and likely closer to $6-trillion.

That's six trillion taxpayer dollars, a mountain of money that has been essentially borrowed which makes it an ever-growing mountain of debt.

In an era in which politicians find it advantageous to insulate the voting public from the true costs of their leaders' adventures, amounts like this are almost impossible to grasp.   It's understandable that America's pols prefer that the public not know that they're now on the hook, per household, to the tune of $75,000 for the two wars, the pair, the set.   A "brace" of wars?

Seventy-five grand, seventy-five large per household.   Now there's a figure you can almost wrestle with.

''There will be no peace dividend'', is the stark conclusion from the 22-page report from the Kennedy School of Government, ''and the legacy of Iraq and Afghanistan wars will be costs that persist for decades''.


"There's a sense that we are turning the corner but, unfortunately, the legacy of these wars, because of decision about the way we fought and funded these wars, means we will be paying the costs for a long time to come,'' Professor Bilmes said. ''We may be mentally turning the page but we are certainly not from a budgetary and financial perspective.''
''More than half of the 1.56 million troops who have been discharged to date have received medical treatment … and been granted benefits for the rest of their lives,'' the report said. It also said the real bills would not fall due for decades to come.

The second major hidden cost of the two conflicts would be servicing the debts incurred as a result of the ''unprecedented'' decision to pay for the wars entirely from debt while cutting taxes during wartime.

And that is the legacy the Republicans bequeathed to the United States.   It was Bush/Cheney who enacted not one, but two major tax cuts for the rich while waging two expensive, protracted and hopeless wars on borrowed money as their nation became increasingly mired in debt and deficits.   That was the true face of oligarchy revealed - only the American people couldn't see it staring straight into their faces.

And now, having done this to their own people, they're going to rape them again by cutting their medicaid, medicare, Social Security, even food stamps to pay for their largesse to the richest of the rich.   Isn't it time to storm the Bastille?
Posted by The Mound of Sound at 10:16 AM

One way to look at $1 trillion is if you think of a pile of money containing $1 million. Then imagine one million of those piles.