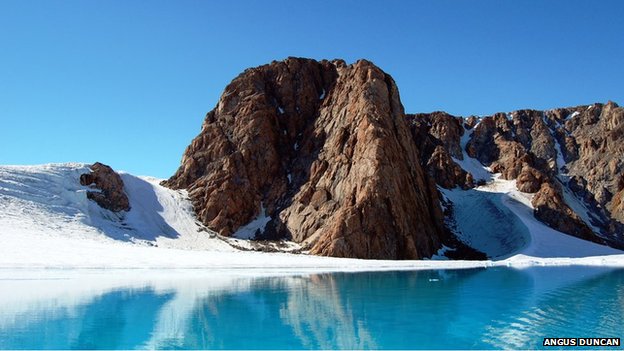 70-billion tonnes a year and accelerating.   That is the amount of ice Canada's Arctic glaciers are reported to be losing annually.

A peer-reviewed report, Irreversible Mass Loss of Canadian Arctic Archipelago Glaciers, published in GRL, Geophysical Research Letters, found that the world's third largest ice field, after Antarctica and Greenland, will keep thinning ever faster until, by 2100, what remains will be melting at 145-billion tonnes a year.
Posted by The Mound of Sound at 10:37 AM

What I do not understand is why people are not a little terrified by this?
I lived through the cold war, when kids looked up in the sky at airplanes wondering if the bomb was going to be dropped on them. And that terrified us.
Climate change frightens us not so much, and that may be what does us in.

Elliott, it's the boiled frog syndrome.

A story about a neglectful angler was told in Cub Scouts when I was little, maybe you remember it. I'm paraphrasing from memory.

A man who made his living by fishing on a lake saw a tiny weed one day near the dock and after observing it for a time noticed that it doubled in mass every day. He estimated that at that rate it would cover the lake in about a month. Comparing the size of the lake to the small size of the weed, the fisher took little notice of the problem, vowing to do something about it later. He was mindful of the problem but not overly concerned. The fish were biting and he became focused on his job, forgetting the impending problem of the weeds. On the twenty-ninth day the man was alarmed to realize that the weeds now covered half the lake. He struggled in vain to chop back the growth but by then it was too late. He'd waited too long and the lake, and his livelihood, were lost to the aggressive little weed.

This story was told to us in part to teach us not to procrastinate, but also to put emphasis on the need for Scouts to be environmentalists wherever they are. It made a lifetime environmentalist out of me.

Watching all this ice disappear is more than a little alarming to me. I truly feel helpless. For all my activism I've seen very little progress towards slowing carbon emissions, much less rolling them back. We are belching greenhouse gases towards extinction. You can only do so much by riding a bike, changing your light bulbs, and buying local. The big emitters, like the tar sands, remain as dangerous as ever and there seems to be nothing I can do about that. If we manage to stop Keystone XL, big oil will find another way to move their filthy product.

Perhaps if more of our leaders had been Cub Scouts we might be taking stronger action now?

That is quite apt, Elliott. It's why we speak of "tipping points" as the point of no return. We know there are points of heating where we trigger natural feedback mechanisms beyond our control that release massive quantities of greenhouse gases, CO2 and methane, that had been safely sequestered for millions of years.

That indeed is underway now in the Arctic where the tundra is thawing and catching fire spontaneously exposing the permafrost beneath. We're powerless to fight those fires or to somehow blanket the permafrost to prevent the release of those greenhouse gases. And, of course, we have a similar problem with once frozen seabed and lake bottom methane that's now being released to bubble to the surface.