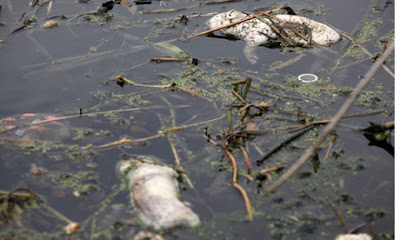 One of Shanghai's main sources of drinking water, the Huang Pu river, has had thousand of dead pigs removed from its waters.  Recent reports put the total at 8,300 and climbing.

Now it's being said that the dead pigs may actually be a good sign.  There's speculation that these are pigs that previously would have been sold to slaughterhouses for processing into meat products.  Now, thanks to a police crackdown, the dead pigs are being tossed into the river.

In May the police in Jiaxing, a pig-producing city, arrested four people who had sold dead pigs to slaughterhouses. And, in December, a Zhejiang province court sentenced 17 people to prison sentences, one for life, for processing and selling meat from pigs that had died of various diseases. In less than two years, the group had collected about 77,000 animals.
So, as the authorities have cracked down on people selling diseased or dead pigs, agriculture experts say, it is possible that someone may have decided it was better to dump dead pigs into the river.