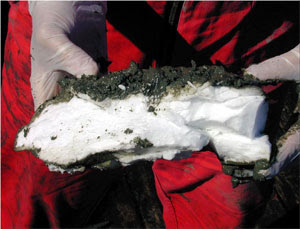 The Japanese have successfully tapped seabed methane clathrates, also known as "flammable ice."   Deposits of compressed and frozen methane are fairly common in northern waters.  British Columbia has looked at exploiting them.

The gas field is about 50km away from Japan's main island, in the Nankai Trough.

Researchers say it could provide an alternative energy source for Japan which imports all its energy needs.

Offshore deposits present a potentially enormous source of methane but also some environmental concern, because the underwater geology containing them is unstable in many places.

This is the equivalent of more than a decade of Japan's gas consumption.
Posted by The Mound of Sound at 10:37 AM

Wow, that is pretty scary. Methane is a far more potent greenhouse gas than CO2. Clathrates are solid under pressure, the very act of miningthem will release a lot of methane into the atmosphere. I don`t know enough about it, but it strikes me that this could be the beginning of a very contentious development.

You're right, BGB. The real danger of methane is from leakage into the atmosphere where it is an extremely powerful greenhouse gas.

I don't know what sort of leakage problem there would be from recovering clathrates in their frozen state and harvesting the dissolved methane in some sort of closed system as the methane/water mixture thaws.

There is a greater problem from clathrates now melting in warming ocean shelves and northern lake beds. We have seen the YouTube videos of Alaskan scientists boring holes in lake ice and setting fire to the escaping methane.