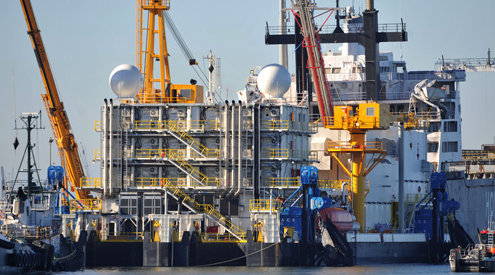 Shell's Arctic Challenger drilling rig is supposed to be bound for the northern waters and the oil riches said to lie beneath the sea bed.   Instead it is tied up at a dock in the port of Bellingham, Washington, and it might be there for a while as U.S. prosecutors close in.

The Coast Guard has asked the Justice Department to investigate possible pollution violations by both the drilling rigs Shell used in its botched efforts to explore for oil last year in the Arctic Ocean waters off the northern coast of Alaska.

In a case eerily reminiscent of the Deepwater Horizon fiasco, Shell is being accused of failing to properly oversee the actions of its contractors who operated the drilling rigs.

Thursday, said the company won’t be allowed to drill again off the Arctic coast until it presents a plan showing that it can better handle conditions there.

The Interior Department’s report said Shell’s problems have raised serious questions about its ability to operate safely and responsibly in the challenging conditions off Alaska. The report said Shell entered the drilling season “not fully prepared in terms of fabricating and testing certain critical systems and establishing the scope of its operational plans.”

“One of the recurring themes that we identified throughout the review was the failure on the part of Shell to oversee contractors that they relied on for critical components of their operations,” Bureau of Ocean Energy Management Director Tommy Beaudreau, who led the probe for the Interior Department, said in a conference call with reporters.

But, hey, what could go wrong?  It's only stormy and cold and remote and dark half the year and, at times, really icy and...

The Justice Department is probing 16 safety and environmental violations the Coast Guard found on the Noble Discoverer, one of two Arctic drilling rigs Shell is using. It’s owned and operated by Shell contractor Noble Corp.

The Coast Guard also is investigating the circumstances of the Dec. 31 grounding of Shell’s other Arctic drilling rig, the Kulluk. It was being towed by Shell contractor Edison Chouest Offshore at the time.

That really should not be a problem...... Just register the vessel in Canada and our gooberment will probably give them a grant to spill (sorry should that be drill) for oil in the arctic with no restrictions......

And a Happy Easter to you too, R. Truth is you're probably right.