"There are a lot of sick people
but they don't have the money to move." 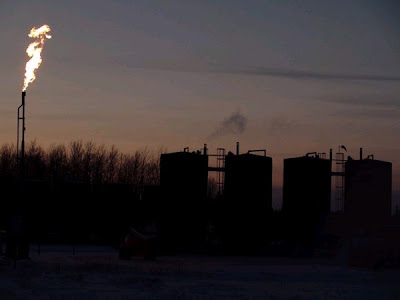 The Tyee's Andrew Nikiforuk reports on what may become a growing problem, Canadians forced out of their homes by toxic pollution from tar sands operations.

"It's a desperate situation," said Vivianne Laliberte who moved into her son's place last October after being repeatedly "gassed" from emissions from oil sands operations just 5 kilometres from her 85-year-old farm.

"There are a lot of sick people but they don't have the money to move," Laliberte told The Tyee. Her farm is located 48 kilometres south of Peace River.

Emissions from heavy oil extraction and storage facilities owned by Calgary-based Baytex Energy Corp., a heavy oil producer, forced her and her husband to abandon their property.
"But I don't blame the company," added Laliberte.

"I blame the ERCB (Alberta's energy regulator). They are not doing proper monitoring and are withholding data. They are responsible for this going on for years. They have lied to us more than the company. I don't know how they sleep at night."

...residents, many of whom were recently profiled in a three-part CBC series, say the province has failed to regulate hydrocarbons being vented off of hundreds of bitumen storage tanks in the region.

"There are no regulations on heated bitumen products. The carcinogens coming off those tanks are just crazy," says 50-year-old Carmen Langer, who worked in the industry for two decades.

His ranch, located 27 kilometres north of Peace River, is surrounded by hundreds of wells and hundreds of bitumen storage tanks.

"Three generations built this farm and now industry pollution is taking it away from us," says Langer, who recently sold his cattle. "We're done. I won't sell my home contaminated. We're not that kind of people."