What? And They Took His Stereo Too? 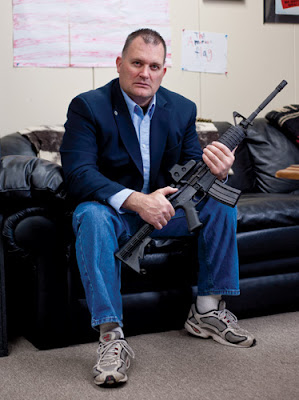 Aposhian is a true believer in the right to bear arms, including the AR-15 assault rifle.  He even believes in the right of a gunowner to leave an AR-15 unattended in his car overnight.

And that's how dumbass Aposhian woke up Thursday morning to find his personal arsenal shy one assault rifle, the one that had been left in his car.   In his defence, Aposhian noted the weapon was unloaded and stored in a secure box which, presumably, his visitors also took.  Yeah and the buggers also snagged his car stereo.  The nerve.

And, in case you're wondering, yes, that is Clark Aposhian with an AR-15-style assault rifle which he may or may not still possess.  We don't know how many cars he has to store them in.

With a little luck there will be a few states short a few thousand citizens if this keeps up.