The Liberal Party Could Use an Elizabeth Warren or Two 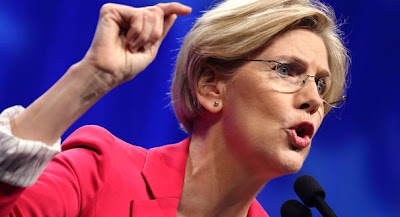 If you want to see the face of progressivism, take a look at Elizabeth Warren.  If you want to understand what progressivism in the 21st century is about, listen to her.   And then ask yourself why we don't have that sort of leadership.

Heavens to Betsy. Sen. Elizabeth Warren leapt from the gate of her first term pummeling Ben Bernanke on too-big-to-fail financial institutions. Then she demanded to know why American banks were never brought to trial. Finally, last Thursday, looking for all the world like a school principal called to sort out teenage hooligans, she queried regulators as to why HSBC bankers who launder money for drug lords and terrorists should go free. Quoth the senator:

"If you're caught with an ounce of cocaine, the chances are good you're going to jail. If it happens repeatedly, you may go to jail for the rest of your life. But evidently, if you launder nearly a billion dollars for drug cartels and violate our international sanctions, your company pays a fine and you go home and sleep in your own bed at night.”

Economist Robert Johnson, executive director of the Institute for New Economic Thinking, who served as chief economist to the Senate Banking Committee under the leadership of William Proxmire, praised Warren's resolve in an email to me: "Elizabeth Warren has chosen to do something novel as a US senator: represent the people. In our money-drenched political system that is akin to defying gravity. God bless Elizabeth Warren."

Who in Canada stands against the excesses of our own corporatism?  Not the Latter-Day-Liberals, formerly known as New Democrats, nor the Conservative-Lites, once known as the Liberal Party of Canada.  It's no coincidence that it's a genuine progressive, like Warren, who represents the people.   The others represent something else.
Posted by The Mound of Sound at 11:05 AM

Maybe NDP MPs make points like these so often, it doesn't make the news.

Maybe you're hearing things, DOC. The NDP, in its quest for power, has allowed itself to become Blairified. It's now a "centrist" party and in modern, petro-state Canada, that's decidedly corporatist. It's all part of the shift by which the LPC and NDP have let down the Canadian people. Maybe if Trudeau's Liberals can give them their long overdue drubbing, the NDP will return to their principles.

The NDP brought Harper to power to begin with. And by doing so torpedoed both The Kelowna Accord, which would have already gone a long way to improving the lives of First Nations people, and the Early Childhood Education program which several provinces had already signed on to.

Both of those initiatives were long desired policies of the NDP. Both would immeasurably improved the lives of Canadians they were intended to help.

Both were cast aside as though they were left over turds because Saint Jack Fucking Layton, damned be his name, had a taste for some Harper ass.

I quit the NDP that very day and will not go back.

Dana, you and I both know that "blaming NDP" for bringing Harper to power is a Liberal myth perpetuated and trotted out as a truth but is not.
So in 2006, Martin Libs had a minority govt and stated that they would call an election 6 wks later.

Now we both know that the Libs could not have got up and running a federal program in 6 wks - we all know that is just not possible.

But one really needs to ask is why the Liberals - since 1993 - just couldn't get their act together to get those 2 programs going. Hmm, I mean they had enough time to rob EI money to do a pretend "balanced budget" on that backs of workers. Oh they had time to con't lower corporate tax rates, but they just couldn't get it together for those promised "forever" social programs.

Leaving aside that Liberals pretend to be progressive but aren't really (and it shows), Layton did go to Martin and say he'd support him if he enforced the Canadian Health Act and not allow creeping private healthcare. Martin said no. Now why not, I ask? Didn't Martin think that keeping the public in healthcare important enough?

But we will leave that aside and do simple math 101.

Martin Liberals were under attack for being a corrupt govt related to Adscam. Who in their right mind would support a corrupt govt?

Harper wanted to pull the plug, and so did the Bloc. Oh, those 2 independents did too!
Harper Cons + Bloc + 2 independents were greater than NDP + Libs combined. That's math.

And Layton NDP would sure look stupid "politically" backing up a corrupt govt that thinks private healthcare is okay and anyway, Martin was going to call an election in 6 weeks, repeat 6 weeks.

It was pure political theater by Liberals, and really Lib victimhood really gets boring. Almost like, Libs are entitled to their entitlements, with or without Canadian tax dollars stuffed in paper bags.

And as for Liberals now perhaps actually being progressive, anything that has come out of Trudeau the anointed is most definitely right of center.

And Dana, you were never an NDPer - that's also bogus.

Ah but I was, woman.

You can call me a liar and you can shriek to heaven till you drop dead of an aneurysm but that will not change the truth.

Stephen Harper became PM with the collusion of the NDP.

Oh, and fuck you too.

Warren should be the Dems choice to replace Obama. Forget Clinton, she's shown her true colors and isn't credible. ie "We came, we saw, he died"...smirk. Witch. Then came tears at the Congressional hearings on Benghazi.

As for Saint Jack, ND's shouldn't forget to lay a wreath for the CWB next to his headstone. Fortunately Tommy Douglas wasn't alive to witness it's death.

I agree, Liz would be an incredible choice to be the first female preznit!