How Twisted was Tony Blair? 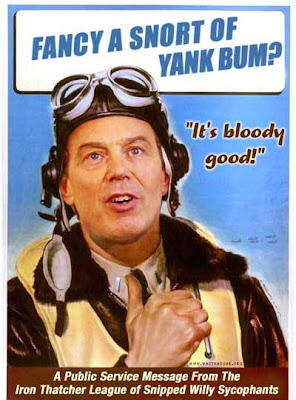 That Tony Blair lied Britain into war with Iraq is obvious and more than a bit creepy.   What's truly creepy, however, is what Blair aides now describe as the evangelical mindset to the world that informed Blair's decision-making.

Sir Christopher Meyer, Britain’s ambassador to Washington during the run-up to the war, writes ...that Mr Blair’s mistakes on Iraq flowed from a “black and white” world view that was “more evangelical than the American Christian Right”.

He says that Mr Blair’s “unquestioning support” for the president “eliminated what should have been salutary British influence over American decision-making” after the prime minister became “an honorary member of this inner group” of neo-conservatives and military hawks who were setting the agenda in the United States.

And, contrary to Blair's repeated protestations to the contrary, he was firmly committed to follow America into war against Iraq, no questions asked, a year before the fact.


...senior Bush White House staff [Stephen Hadley and Andrew Card] confirmed for the first time to The Sunday Telegraph that they had viewed it as a certainty that Mr Blair would back any US-led invasion, long before he publicly committed Britain to taking part.


They say he made clear his unwavering support for US policy nearly a year before the invasion, after a visit to the president’s ranch in Crawford, Texas.

These revelations from top British and American officials directly involved in the run-up to the Anglo-American war on Iraq make Blair's performance before the British government's Iraq enquiry sheer Kabuki theatre.

Sir Christopher Meyer was Britain's ambassador to the U.S. during these events.   He writes that Blair was more neo-con than any in the Bush administration.

With his Manichean, black -and-white view of the world, Mr Blair was in his way more neo-con than the neo-cons, more evangelical than the American Christian Right. From this flowed Britain’s contribution to the mistakes made before and after the Iraq invasion, despite repeated warnings from the Foreign Office and the Washington embassy.

The failure to synchronise plans for military action with the renewed programme of UN inspections in 2002/2003 meant that the latter were curtailed before complete. This, more than anything, forfeited Security Council support for US/UK military action. The failure to plan meticulously for Saddam’s aftermath led to almost a decade of violent chaos and the ultimate humiliation of British forces. Mr Blair’s unquestioning support for Mr Bush eliminated what should have been salutary British influence over American decision-making.
Posted by The Mound of Sound at 12:37 PM

Another good article from the often maligned British press;

"One point seldom made, but of great importance in determining what happened later, is that the military campaign to overthrow the Iraqi government may have begun on 19 March 2003, but the economic war against Iraq started 13 years earlier with devastating results for its people. Indeed, the worst disaster for the Iraqi people as a whole arguably took place before the invasion and not afterwards. UN sanctions between 1990 and 2003 amounted to an economic siege, unprecedented in its severity outside military conflict, that destroyed the Iraqi economy and reduced millions to poverty."


Have you seen the BBC documentary The War Party? If not, I recommend it, as it's absolutely stunning in many ways including Tony Blair's pledge of liberation to the Iraq people, and David Frum stating the war with Iraq will be good for America.

Tony Blair is a Roman Catholic. RC´s can be just as far right wing as Evangelicals and have even practiced that form of worship within their own confines.

I've always loathed Tony Blair. But when it came to his time as bush's poodle, I honestly didn't know if I despised the spoiled, frat-boy cretin bush II or the sanctimonious, hypocritical racist Blair more.

Credit should be given where credit is due. Tony Blair is a dedicated Catholic and should be able to vote for the selection of new Pope. He, also, should be an employee of Vatican as he will quickly burry all the scandals deep under the Vatican.

Anon is right. Blair converted at the end of his political career. He did seem predisposed, however, to zealotry. He strikes me, when he appears in public these days, as half-crazed. Others must think so too, given Blair's inability to muster support for his post-political career.

Mound
When I see Balir he has the same zeal in his eyes and certainty of mind that that other British whacko had - David Icke. (http://en.wikipedia.org/wiki/David_Icke)
Icke on the other hand didn't belong to a mainstream religion. so is referred to as mad, where as Blair is simply pious.

David Icke, don't remind me, I just ate.................though the thought of the Royal Family turning into reptiles when no one is looking is amusing!

And I do think Tony Poodle converted to Catholicism when Gordon Brown took over the big chair......I felt he thought it inappropriate to be an RC while PM - you know the Church of England and all that......I guess the Queen is the Popessa of the C of E, but the PM must be at least an altar boy with perks.