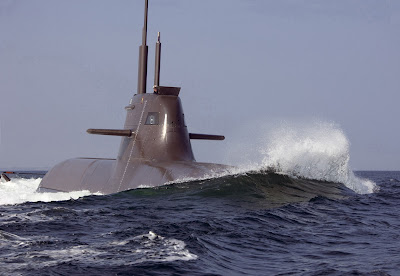 In 2013, "sub-prime" can refer to the burgeoning international market for submarines, underwater warships.   We don't notice it much in Canada but, world wide, the submarine industry has been very busy and is set to continue growing for many years to come.

British market research and analysis company Frost and Sullivan said especially in demand will be submarines with air-independent propulsion systems.

"The naval operations environment has changed significantly; operations at sea have moved from the 'blue water' open ocean to the 'brown water' shallow coastal environment," said Frost and Sullivan Aerospace, Defense and Security Industry Analyst Dominik Kimla. "The importance of smaller and quieter conventional submarines, rather than larger, nuclear-powered (ones), has increased significantly."

These conventional, "air-independent" subs have the U.S. Navy worried enough that it's developing an ocean-going killbot to counter them.

Here's a list from Wikipedia of countries that currently operate submarine fleets.

I'm sorry .. I had no idea we were actually capable of operating submarines. I know we bought some from Britaini.. spent beaucoup dough on them.. and dinged or rammed em on a few ocean bottoms .. but do they actually 'serve' or 'defend' anyone ? Like a Canadian or two.. or three? Just what are they defending.. and what support ships replenish them or save their waterlogged arses ?

i suspect a beat up Dodge police cruiser with two beat cops by the shoreline in Dartmouth or Tofino would offer a better defense of Canada eh. That's not a slag at our naval warriors n sailors.. that's a shot across the bows of the pudge econ o missed primordial slime minister that knows about as much about marine matters as his minister Ashfield of Dead Fishes n Oceans n Coasts Unguarded .... or his mistress of hellycopter defensive denial F-35er Mackay..

What's with these drippy dweeb losers ? Have they got fakey Photoshopped pictures of a majority of Canadians in bed with single female beavers or male elk ? Just what hold do these abject losers have on us?

I swear if we turfed their slimy arses out of Ottawalberta they'd be afraid of takin us all on in court o law. Like cockroaches they have trouble with light of day or answering a simple question without calling Arthur Hamilton b twenty clerks to prep then speak at 500 to 1,000 per hour or more, re their denial and whining of 'baseless smears'

Every minute they remain in parliament, they shame all of us more .. through their teflon greasy disgusting shamelessness ..

So many Wolf packs, so many who hunger.

"Every gun that is made, every warship launched, every rocket fired signifies, in the final sense, a theft from those who hunger and are not fed, those who are cold and are not clothed.
This world in arms is not spending money alone. It is spending the sweat of its laborers, the genius of its scientists, the hopes of its children. The cost of one modern heavy bomber is this: a modern brick school in more than 30 cities. It is two electric power plants, each serving a town of 60,000 population. It is two fine, fully equipped hospitals. It is some fifty miles of concrete pavement. We pay for a single fighter with a half-million bushels of wheat. We pay for a single destroyer with new homes that could have housed more than 8,000 people. . . . This is not a way of life at all, in any true sense. Under the cloud of threatening war, it is humanity hanging from a cross of iron"

I read a series of articles recently about the $100 billion per year Private Security industry. Read, mercenary force for hire. Have guns, will travel. Apparently a very popular service for those seeking regime change and other, and can afford the price.