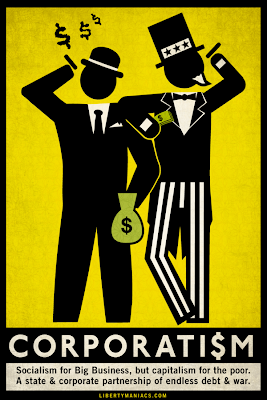 Republicans, it seems, are willing to support Medicaid expansion, Obamacare as they call it, providing their side gets a hefty cut.  Paul Krugman explains how the Right intends to graft a little graft onto Medicaid and he uses the pretty glaring example of Florida's governor as an object lesson.   When it comes to rightwing government, it's corporatism that matters, not conservatism.


Consider the case of Florida, whose governor, Rick Scott, made his personal fortune in the health industry. At one point, by the way, the company he built pleaded guilty to criminal charges, and paid $1.7 billion in fines related to Medicare fraud. Anyway, Mr. Scott got elected as a fierce opponent of Obamacare, and Florida participated in the suit asking the Supreme Court to declare the whole plan unconstitutional. Nonetheless, Mr. Scott recently shocked Tea Party activists by announcing his support for the Medicaid expansion.

But his support came with a condition: he was willing to cover more of the uninsured only after receiving a waiver that would let him run Medicaid through private insurance companies. Now, why would he want to do that?

Don’t tell me about free markets. This is all about spending taxpayer money, and the question is whether that money should be spent directly to help people or run through a set of private middlemen.

And despite some feeble claims to the contrary, privatizing Medicaid will end up requiring more, not less, government spending, because there’s overwhelming evidence that Medicaid is much cheaper than private insurance. Partly this reflects lower administrative costs, because Medicaid neither advertises nor spends money trying to avoid covering people. But a lot of it reflects the government’s bargaining power, its ability to prevent price gouging by hospitals, drug companies and other parts of the medical-industrial complex.

But why would you insist on privatizing a health program that is already public, and that does a much better job than the private sector of controlling costs? The answer is pretty obvious: the flip side of higher taxpayer costs is higher medical-industry profits.

So ignore all the talk about too much government spending and too much aid to moochers who don’t deserve it. As long as the spending ends up lining the right pockets, and the undeserving beneficiaries of public largess are politically connected corporations, conservatives with actual power seem to like Big Government just fine.
Posted by The Mound of Sound at 11:19 AM


The list of the best PPD sites will be shared in this article. All those who want to make money through the best pay-per-download
sites will get a
Trusted PPD Sites
New pay per download sites
pay per Download network

the clash of magic said...

The clash of lights game download apk is one of the most prevalent and utilized APP over the WORLD,
however as the time passes individuals began feeling that it is ghastly to play with the Upgrades.
We will give the arrangement so everybody can appreciate
the Clash of Magic without exhausting things and one can appreciate more than before it was propelled.
clash of magic download apk for android
clash of clans hack apk download
clash of clans mod apk unlimited troops download

Mobile mechanic near me is a garage on Wheels! offering everything from oil changes and tune ups to brake discs & pads replacement and jump-starts.

car mechanic near me
mobilecarmechanicnearme.co.uk