Hugo Chavez Has Left the Building 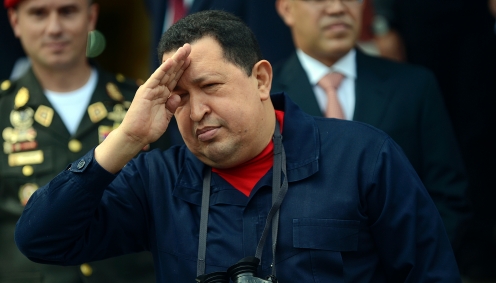 Our ever graceless Harper greeted the news with apparent delight.   “At this key juncture, I hope the people of Venezuela can now build for themselves a better, brighter future based on the principles of freedom, democracy, the rule of law and respect for human rights.”

Harper capo John "Back Door" Baird tried to sneak into Venezuela to stir things up but scurried to safety at the last moment.

Foreign Affairs Minister John Baird was to have travelled to Venezuela two weeks ago but the trip was abruptly cancelled because Chavez made an unexpected homecoming from Cuba.

Baird had been scheduled to hold meetings with government counterparts and other opposition representatives as part of a six-country tour of Latin America.

Maybe the lard-arsed duo should compare their numbers in our last federal election to the vote Chavez won in his.   Of course that's not important to Harper's notion of democracy and freedom.
Posted by The Mound of Sound at 2:18 PM

He'd been sick all this time, but I still wasn't remotely prepared. He's from half way across the world but I feel like when Jack died. In some ways more; he was in many ways the leader of the whole world's most progressive forces.

Now we wait to see what becomes of Venezuela.

"the principles of freedom, democracy, the rule of law and respect for human rights."

The piece-of-shit harper has no shame.

Salute to the leader who set his own rules,who dared to take on the super powers.like him or not, he sure made his mark in history.

Hugo Chavez was loved by Venezuelan people as he looked after the poor; Cons hated him in U.S and Canada because he refused to bow to the idiots like Bush and Harper. He called Bush a devil and a donkey which Bush is. I did feel sad when I heard about his death.

I'm confident in his heart of hearts (assuming he has one, or something equivalent like Dickhead Cheney has) Harper feels less small inside with Hugo gone from this plane!

I fear the right wingnuts in Venezuela will take this as a cue to take the country back to its colonial style and join the rest of the world (excepting much of Latin America) in kowtowing to corporate rule and increasing concentration of wealth.