The Dark Face of European Anti-Semitism

I am a regular critic of Israel, particularly its policies and acts toward the Palestinians and its destabilizing nuclear arsenal.  One cannot speak of these things without inviting accusations of anti-semitism plainly intended to stifle critics. 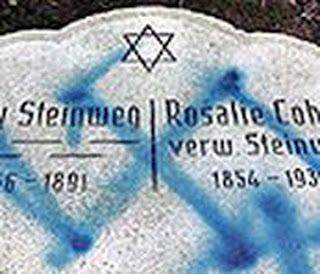 Anti-semitism does, however, remain a real and ongoing challenge to us all and to our hopes for a better society.  Katrina Lantros Swett, writing in The Guardian, has a disturbing account of the rise of anti-semitism in Europe.

In Hungary, my parents' native country, the leader of its third largest party recently urged the government to create a list of Jews posing "a national security threat" – even as the government, including its parliament, condemned this statement.

Even in western Europe, where some of America's strongest historic allies reside, antisemitism also remains. Since 2000, anti-Jewish graffiti increasingly has appeared in Paris and Berlin, Madrid and Amsterdam, London and Rome, and synagogues have been vandalized or set ablaze in France and Sweden.

In Malmo, Sweden, physical attacks have fueled a Jewish exodus. A generation ago, Malmo was home to 2,000 Jews; today there are fewer than 700. In France, "unprecedented violence" took place last year..

Compounding the problem are four factors. First, European officials remain reluctant to identify the ideological or religious motivations of the perpetrators. Second, surveys show that negative attitudes towards Jews among Europe's population remain widespread. Third, these surveys confirm that some of this bias reveals itself through certain criticisms of the state of Israel: while no country is beyond reproach, when criticism includes language intended to delegitimize Israel, demonize its people, and apply to it standards to which no other state is held, we must call it antisemitism.

Yet, there are other reasons to care. When Jews face trouble, so often do other minorities. And as the second world war taught a whole generation of Americans, the same forces targeting Jews often oppose freedom for all. The fight against antisemitism is a key element in freedom's battle against tyranny. It is a fight to preserve civilization and further human progress.

I am with Ms. Swett, right up to the point where she tries to stigmatize criticism of Israel as anti-semitism.    Some of it is but much of it isn't.   There is much legitimate criticism of Israel that, in fact, is based on demanding it accept the very standards to which every other state is held, standards it steadfastly refuses to accept.

Email ThisBlogThis!Share to TwitterShare to FacebookShare to Pinterest
Labels: anti-Semitism