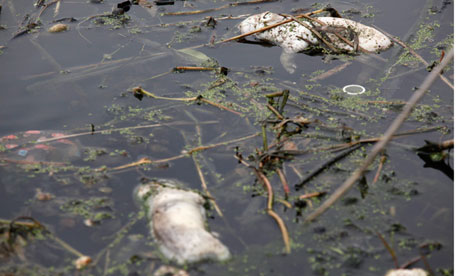 Shanghai has a water problem.   Somehow more than 2,800 dead pigs wound up floating in one of the main rivers that supplies drinking water to the mega-metropolis of 23-million.

Nobody has figured out where the pigs came from yet.   How some farmer can conceal the absence of nearly three thousand pigs is a bit tough to understand.   Yet the animals show no sign of disease or any other obvious cause of death.

Apparently this is nothing new.

"You can see dead pigs here every year, but there are more now than in the past few years," a local man told the [state broadcaster CCTV].

The Jiaxing Daily newspaper in northern Zhejiang province quoted a villager as saying that over the past two months almost 20,000 pigs in his village have died of unknown causes. While Shanghai compensates its farmers for properly disposing of dead swine, the newspaper said, Zhejiang and Jiangsu provinces lack a comparable incentive system, so farmers there often dump their pig carcasses directly into local rivers.

"The local authorities are conducting co-ordinated efforts to stop the dumping of dead pigs from the source," said China's official newswire Xinhua.

Experts say the groundwater in half of all Chinese cities is contaminated, most of it severely, and that soil pollution could be widespread in 15 of the country's 33 provinces.

A study released last year found that upwards of 40% of Chinese farmland is now contaminated by arsenic and heavy metals carried from factory smokestacks.   China is in a race to salvage its agricultural production, a race that might already be lost.
Posted by The Mound of Sound at 11:35 AM

"While Shanghai compensates its farmers for properly disposing of dead swine, the newspaper said, Zhejiang and Jiangsu provinces lack a comparable incentive system, so farmers there often dump their pig carcasses directly into local rivers."

I know it may seem off topic, but Libertarians are idiots. This is yet another example of why--basically, they want this to be the status quo.

I too have read. Much of China's farmland and water is polluted. It was said, there are heavy metals and cancer causing agents, on the land and in the water. Some Chinese farmers have had to give up their farms. Even the fish are poisoned. So, the die off of pigs in China, is no great surprise.

Countries near China are worried. China's heavy black smog, will poison, their food crops and water.

China does not respect their own eco-systems. Every country China gets into, they poison water and land.

And still? China wants the dirty lethal Bitumen, from the tar sands. The dirtiest oil on the planet, going to China? How stupid can Harper be?

Anon, I think the Politburo finds itself in an intractable jam. It struggles to control a boom economy and harness that to China's economic and political global ascendancy. It has to meet enormous energy demands to keep that economy from collapsing. It is beginning to respond to the unrest caused by inequality. And, atop everything else, it has this enormous pollution problem that will be tough enough to arrest and perhaps impossible to truly reverse. China is like one giant social, economic and environmental experiment on acid.