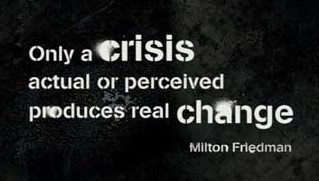 The company is called Water Asset Management.   Surely the name speaks for itself.  It has to be about water, right?   Or the management of water surely.   Well, in reality, it's a hedge fund.  From Bloomberg BusinessWeek.

Drought is helping spur business at Water Asset Management. The New York hedge fund, which has about $400 million under management, buys water rights and makes private equity and stock market investments in water treatment companies. “Not enough people are thinking long term of [water] as an asset that is worthy of ownership,” says Chief Operating Officer Marc Robert. “Climate change for us is a driver.”

Derivatives that help companies hedge against abnormal weather and natural catastrophes are drawing increased interest from some big players. In January, KKR (KKR) bought a 25 percent stake in Nephila Capital, an $8 billion Bermuda hedge fund that trades in weather derivatives. (The firm is named after a spider that, according to local folklore, can predict hurricanes.) “Climate risk is something people are paying more and more attention to,” says Barney Schauble, managing partner at Nephila Advisors, the firm’s U.S. arm. “More volatile weather creates more risk and more appetite to protect against that risk.”

When investors think about global warming, “there is an overemphasis of its negative impacts,” says Michael Richardson, head of business development at Land Commodities, which advises rich individuals and sovereign wealth funds on purchases of Australian farmland. The company’s pitch: The gloomy prospect of hotter temperatures, scarce arable land, and rapidly rising populations will make inland cropland Down Under—far from rising seas yet close to Asia’s hungry customers—more valuable. The Baar (Switzerland)-based company worked on more than $80 million in transactions last year, four times its 2011 total, according to Richardson.

The same lions of capitalism that have created the problems imperiling mankind, that have used their wealth and influence to retard government action to protect us, are now lining up to exploit the very misery they have created.   Can we really live with capitalism when it's steering us into feudal serfdom?

Free market capitalism works on a very amoral ethos.  Corporations are not creatures of conscience no matter how they try to pretend otherwise.   They have no place in questions that go to the very survival of our civilization.