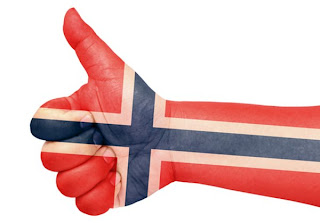 The last competent premier of Alberta, Peter Lougheed, understood the downsides of becoming addicted to fossil fuel revenues and he offered his wisdom free of charge to anyone who would listen.  Nobody did - not Ralph Klein, not "Special Ed" Stelmach, and not Alison Redford either.   Even the self-proclaimed economist prime minister wouldn't listen.

And that's why the government of Alberta is plunged into fiscal calamity once again.

It's all in that classic Alberta bumper sticker that reads, "Dear God, give us just one more oil boom and, this time, we promise we won't piss it away."   And then, when the boom comes, you're like Lucy spotting the football for Charlie Brown.

But that's not what brings me to write, Alberta.   It's this bit of news gleaned from BBC.  It's about one of those northern European welfare states that Steve Harper has been so fond of mocking, Norway.   Guess what?   Norway's oil-revenue based, sovereign wealth fund grew at 13.4% last year, it's second-biggest growth in history.

So, let's see:  rightwing, free-enterprise Alberta is dead broke but nanny-state Norway is up to its neck in kroner.

The Central Bank said the fund's investments in shares jumped by 18.1% in 2012, boosted by soaring equity indexes around the world.

Norway's fund invests the money from its huge oil industry in the nation's future.

The sovereign wealth fund is now 40% bigger than the value of the entire Norwegian economy. If it was invested inside the nation, this would cause distortions like massive inflation.

Wow, sounds like Norway has read the Peter Lougheed Plan.  They invest their oil revenue.   Their accumulated investment is now far greater than their entire economy.   They understood that injecting that revenue into their own economy would cause damaging distortions like massive inflation.

That's another good reason why British Columbians should properly reject your pipeline demands.   You can't be trusted with the money anyway.   You're like children, irresponsible children.  You're not to be trusted.   If you can't handle your own money why on earth should we trust you not to make a mess of our environment?

You're not to be trusted.   You're not Norway after all.
Posted by The Mound of Sound at 12:35 PM

Watch them. They're about to destroy their own post-secondary education system in the name their god. http://www.edmontonjournal.com/Simons+Government+plan+harmonize+Alberta+post+secondary+institutions+puts+academic+autonomy+risk/8071824/story.html

Makes you wonder about a government that wants to set "fix" post-secondary curricula to comport with its political interests. And we mock Chavez.

When a country has the balls to say to people like ExxonMobile No..we get 80% and you get 20% then it is eaily understood why Norway is in the position it is. Now....Canadians and the Canadian Goverment does not have that kind of backbone.

Alberta doesn't have that leverage. Their bitumen is low-grade, high carbon stuff that is difficult and expensive to extract, process, transport and refine. As petroleum goes, it's pretty low on the scale. That's why we've been chasing a bad dream when we imagine enormous wealth from low-grade/high-cost bitumen.

It doesn´t matter if Alberta´s oil is low grade or not...there still isn´t any backbone. Oil out of Newfoundland certainly isn´t low grade but every bit is going to the US at reduced rates and Atlantic Canada purchases its oil from Saudia Arabia at higher rates...something really stupid about that...No?

Its not that Alberta pi$$ed away both of the surpluses -

From the first one, we ended up with Kananaskis provincial (otherwise known as Peter Lougheed) park.

Of course thanks to those esteemed regulators, we are now subsidizing the American Consumer to the tune of $40 per barrel.

For the rest of Canada, that is no laughing matter, as a significant portion of federal tax revenue is lost through that differential as well.