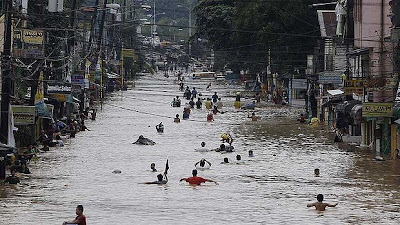 The Philippines are now being thought of as the "miners' canary" of climate change.  The archipelagic state has reeled under the impacts of sea level rise and typhoons of increasing frequency and intensity.  But the capital, Manila, is the worst of all and now faces permanent flooding because residents have compounded sea level rise and storm surges with subsidence caused by draining their aquifers.


In an interview with GMA News Online, Dr. Kelvin S. Rodolfo, Professor Emeritus at the University of Illinois at Chicago, explained that the over-pumping of groundwater is the main cause of land subsidence –or the sinking of land— in Metro Manila and other highly populated areas.
In the Philippines, he detailed, global warming is causing relative sea levels to rise by seven to eight millimeters a year. But subsidence is occurring at more than twice that rate —from 20mm to as much as 90mm a year— particularly in Bataan, Pampanga, Bulacan and CAMANAVA (cities of Caloocan, Malabon, Navotas and Valenzuela).
Coupled with sea-level rise, land subsidence can produce higher tides that reach farther inland, as well as floods that recede more slowly. This could lead to permanent flooding, said Rodolfo, who is also a consultant for the Science and Technology Department’s (DOST's) Project NOAH (Nationwide Operational Assessment of Hazard).
“(The) ultimate problem is population. As population increases, groundwater use increases… and overuse of groundwater can greatly speed up the process (of land subsidence),” he said.

“Metro Manila’s ground water demand is still increasing… Consequent subsidence will continue and even accelerate,” the geologist claimed.
Posted by The Mound of Sound at 8:59 AM

That's scary how the Philippines is in danger of global warming...

Yes it can be scary. It's becoming apparent that those who still insist on denying that global warming exists routinely come from inland areas. Coastal populations around the world see the impacts quite clearly from sea level rise, to the salination of coastal freshwater resources, to extreme weather events and storm surges, to the extinction of some marine species and the arrival of previously foreign species.