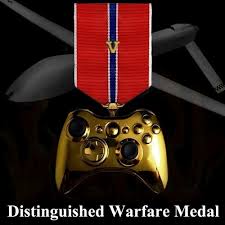 The sort of warfare the West has been waging this century is largely without heroes in the connotation of that word in previous wars.

There have been some to be sure.  These are mainly infantry soldiers who actually do something incredibly brave and gallant in the midst of combat.

We have padded the thin ranks by according the status of hero to everyone who happened to look when he should have ducked or  met up with an IED at the wrong moment.   If you come back in a box, you're a hero.

In previous wars dying merely meant unlucky.   Bravery was above and beyond simple expiry and heroism a good notch above ordinary bravery.

Trust the Americans to take this ersatz bravery farce to the ultimate extreme.   They've come up with the Distinguished Warfare Medal.  In the scheme of bravery awards it falls between the Bronze Star and the Silver Star combat heroism awards.

So who are these Distinguished Warfare Medal heroes to be honoured?  They're drone operators.   Those guys who heroically man air conditioned trailers in air bases in the American west commanding drones over Afghanistan, Pakistan or any of the other tourist attractions the White House likes to whack.   Those guys really put it on the line, don't they?   And after a harrowing day of combat those guys have to go home and mow the lawn before they can relax poolside with a frosty Marg.

America's new defense secretary, Chuck Hagel, got an earful about the DWM from combat veterans who figure heroism awards should be for people who actually do something heroic.   Chuck, who holds a few combat awards of his own, including two Purple Hearts earned on the line in Vietnam has wisely decided to put this whole Distinguished Warfare Medal idea on hold.
Posted by The Mound of Sound at 9:53 AM

Geez, I sure do hope the Shrub that looks like a monkey got a medal for defending the TexMex border from the air (until it was embarrassing to pee in a bottle) and working to elect Southern Republican Congress Critters during Vietnam!