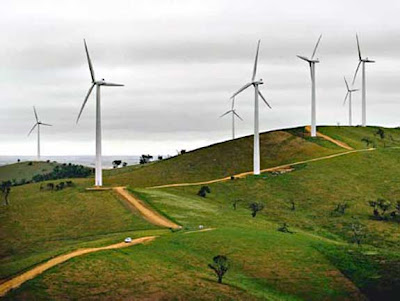 The source of wind-turbine illness has been tracked down.   The source is anti-wind farm campaigners who make people think those windmills are going to make them sick.  Let's call them "windfarm wankers."

It was obvious that there's nothing inherently sickening about wind farms by the number of communities elsewhere, particularly in Europe, where local populations live with them and report no problems.

Now an Australian study has linked windfarm illness to the presence, not of windmills, but of the anti-wind power campaigners.

Complaints of illness were far more prevalent in communities targeted by anti-windfarm groups, said the report's author, Simon Chapman, professor of public health at Sydney University. His report concludes that illnesses being blamed on windfarms are more than likely caused by the psychological effect of suggestions that the turbines make people ill, rather than by the turbines themselves.

"If windfarms were intrinsically unhealthy or dangerous in some way, we would expect to see complaints applying to all of them, but in fact there is a large number where there have been no complaints at all," Chapman said.

It's easy to see how this plays out.   There's a lot of NIMBYism generated by windfarms.   People complain it spoils their pastoral view or lowers their property values.  That it seems leaves them pre-disposed to developing "windfarm sickness" on cue when that's suggested by windfarm wankers coming about to stir them up.

In September, 2010, I was involved in a running squabble with Wind Concerns Ontario that led to this post, "Calling Bullshit on Wind Power Witch Hunters."  It got to the point where WCO mouthpiece and windfarm wanker, John LaForest, blocked comments from me on their web site.   Nice work, John, you did yourself proud.
Posted by The Mound of Sound at 5:52 AM

Are Windfarm Wankers financed by oil interests or am I being too paranoid? Who else would be behind groups agitating?

That has been suggested, Anon, but I honestly have no idea.

Here in Mexico there aren´t any problems either with wind farms. Anyong.

This is not surprising given that the Harperites are essentially oil company employees.