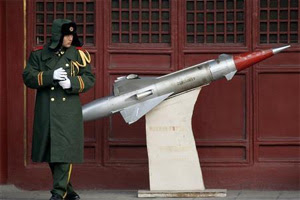 China may soon become the only nation with the hardware to take down high geo-stationary orbiting satellite systems such as GPS.  The U.S. is warning that China is preparing for a third anti-satellite (ASAT) weapon test.

There is now speculation that orbiting debris from a 2007 Chinese ASAT test may have struck and disabled a Russian satellite.   The concern is that space garbage may strike and cause other satellites to explode adding enormous amounts of space garbage to threaten other satellites creating a "cascade" that quickly renders space unusable.

China has responded to the U.S. complaints by saying no matter what it does the U.S. has already militarized space and America has only itself to blame for refusing Chinese overtures to join China and Russia in a space treaty.

an editorial in China's state-run Global Times said concerns being expressed about the program were overblown. The editorial in the characteristically evasive but long-winded manner of semi-official Chinese statements, said:

"China reportedly conducted an anti-satellite test in early 2007, which caused a great uproar. Some analysts said that even if China really once again launches a test, it will not strike down satellites, but invalidate them...

"Whether China will launch new anti-satellite test is still unknown. However China should continue substantive research on striking satellites. In the foreseeable future, gap between China and the US cannot be eliminated by China's development of space weapons...

"The US advantage is overwhelming. Before strategic uncertainties between China and the US can disappear, China urgently needs to have an outer space trump card...

"China's public policy is peaceful use of space, which is also China's real desire. China has no interest in launching a large-scale space race with the US. China and Russia jointly initiated a programme to avoid an arms race in outer space in 2008, but this proposal was refused by the US...

"Against this background, it is necessary for China to have the ability to strike US satellites. This deterrent can provide strategic protection to Chinese satellites and the whole country's national security..." 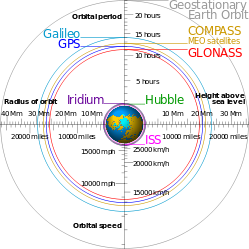 Lol, of course China wanted a treaty! Think back to Adolf Hitler in 1933 argueing for an arms 'limitation' treaty that froze arms production at current levels, while all little lost Germany wanted was parity with the other powers. Of course, Germany had zero heavy weapons, so the true objective was to arm Germany at break-neck speed, until they acheived parity, while obliging the rest of Europe to stick with their current levels of antiquated weaponry.

Actually, Matthew, it is an open question as to how China would react if the US decided not to treating them as a military threat and maintaining a major military presence on their doorstep. Comparing China to 1930s Germany is absurd. China is not an economic basketcase, it is the emerging chief economic power in the world. Warmaking is counterproductive to sustaining that level of prosperit. Yet if it China is continually regarded as threat by the US, and vice versa, then there be arms races.

Right now the US is focussing on high-tech tactical weapons systems like the F-35 and weird stealthy warships. The Chinese are focussing on building strategic power. A blue-water carrier force is one part of that strategy. Another part is the capacity knock out the GPS satellites that guides nearly every US weapon system.

Um, no. GPS is a 24-satellite system in a non-stationary "medium" orbit configuration.

I expect the Chinese to act with circumspection, because if they get 'starchy', the US has the X-37B robotic "space plane" that can get to anything the Chinese launch, like their own space station.

You're right Ed. I added a graph above to illustrate.

As for whether China would act rashly, I don't see that. Taking down GPS would be a major "act of war". To do something like that, China would either have to be under attack or committed to initiating war itself.

The X-B37 is an X-plane at the moment, hardly an instrument of war just yet, although it could be a trigger for war.

I don't know about HuffPo but Aviation Week believes the West is enormously skilled at underestimating the pace of Chinese technological advance. What the Chinese also do far better than the Americans is to focus their efforts on demands for "their" quarter of the planet.