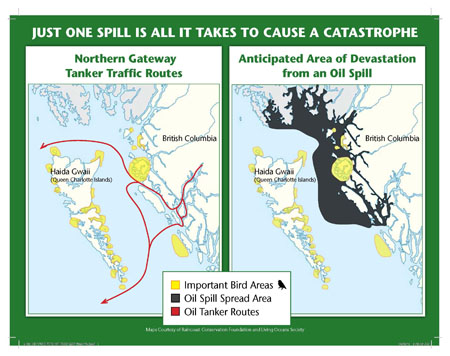 The Harper government, or someone on its behalf, will show up in Vancouver today to announce that Ottawa has heard our concerns and has prepared a "world class" oil spill programme to mollify our concerns about a tanker disaster on the west coast.

Natural Resources Minister Joe Oliver and Transport Minister Denis Lebel will be in B.C. to provide details of a long-term funding commitment to the National Aerial Surveillance Program, first established in 1991, as well as new funding measures to “enhance” the program’s coverage, especially along the northern B.C. coast.

The ministers will also announce a more rigorous tanker inspection program as well as the creation of a “Tanker Safety Expert Panel.”
The Harper government has made no secret that one of its top priorities is to ensure that Canada’s oilsands sector has access to Asian markets for Alberta’s diluted bitumen crude.

But two proposals to accomplish that objective — Enbridge’s Northern Gateway pipeline project to Kitimat, and Kinder Morgan’s plan to twin its existing pipeline from the Edmonton area to Burnaby — have been hugely controversial.

One of the key public worries is the risk of a major oil spill.


Monday’s announcement is aimed at public concerns about the risk of a spill similar to the 1989 Exxon Valdez disaster off the Alaskan coast.

The federal source noted that Canada already has a strong spill prevention system and has never experienced a major incident.
However, it can always be better, he said.

A key component of the strategy is to “enhance” the National Aerial Surveillance Program, which has three aircraft — including one in Vancouver — engaged in monitoring shipping activities and watching for illegal discharges.

The ministers will also announce changes to the existing tanker inspection system. All Canadian tankers are now inspected manually, while foreign-flagged vessels are inspected on their first visit and then subjected to follow-ups for tankers who come regularly to Canada.

From now on, all foreign vessels will get the same treatment as Canadian ships, with required annual inspections.

The final component is the creation of a Tanker Safety Expert Panel that will be asked to review the current system and come up with new suggestions to ensure Canada meets the “world class” test.
In a word, this is "bullshit."  It doesn't begin to address the key dangers of notoriously bad weather and lethal currents, the many ways that ships go out of control from mechanical or human failure, the fact that bitumen doesn't float it sinks and that, once congealed in BC's cold coastal waters it can never be siphoned up, the fact that the supposed oil spill recovery vessels can't operate in BC's typically rough seas or any of the problems associated with transporting bitumen across the seismically active and inaccessible British Columbia interior.

We don't need a Tanker Safety Expert Panel.   That job was done years ago by the top guys in the Canadian and United States Coast Guards when they initially formulated the West Coast Tanker Exclusion Zone that Harper and Enbridge are determined to ignore.

This is, in all respects, an admission that the Harper government has no answers for the challenges it needs to address and so, in default of that, tries to cover up its failures with window dressing.  It won't sell here but I'm sure it will sound just dandy to dimwits east of British Columbia.
Posted by The Mound of Sound at 7:10 AM

A useful exercise will be to 'map' & collect how the mainstream media reflects on, does some research and 'reports' this Harper initiative. 'Mapping' all rebuttals and follow-ups by government and other vested petroleum interests and nations US - China would be useful too. Then 'indy' media, bloggers etc can refresh and re-aim the mainstream.. spoon feed them facts, so to speak. a few exceptions aside, mainstream is essentially just aggregating.. and can barely spell.

This is a MEP (media event proposal) poker chip straight from the chief cowpoke Harper, PMO, PCO and Ray Novak.. then offed to Minister of Bitumen Froth Joe Oliver & Denis Lebel to take any self proclaimed Glory and absorb and note every attack, or common sense observation.. so proper retribution can be scheduled.

Its a fairy tale.. like Oliver spouting about drinking water from tailings ponds. Harper claiming Canada will never sell diluted bitumen to Nations with lower pollution standards. Which must be why he's supervising the degradation of Canada's standards.

The Harper 'Tanker Safety Expert Panel' is Door # 3 .. Somewhere behind that door the buffalo roam with Jehoba and we will discover the navigational and seafaring genius of Stephen Harper himself, that pious environmental protector. The man who's seen the wind, controls it too.. and commands the water.. mebbe even walks upon it with jebuz and claims we aint seen nothing yet!

The man who's tasked himself, his PMO, his party and Peter Kent, Keith Ashfield and Gerry Ritz to rid Canada of wild salmon for farmed salmon exports.. also asserts Canada must further slash at and demolish the Pacific marine ecosystems, with tanker traffic, sonar, and spills.. for jobs and prosperity and that other nonsense.

And good luck if you're not in one of those Very Large Crude Carriers, but in a 40 foot sloop, fishing boat or pleasure cruiser in the Dixon Entrance, Inland Passage, Horseshoe Bay or The Salish Sea

All this fed by an infrastructure of tar sands and fracking pipeline networks flowing to Kitimaat, Vancouver and Prince Rupert.
The coast is toast .. down with the boreal .. who needs water must be the mantras chanted in The Prime Ministers Office..

This government should be shredded mercilessly by mainstream media for exhibiting zero reasoning powers, frothy and limp analysis, complete lack of comprehension or reality.. sheer environmentally destructive arrogance and posturing.. and their precocious and pedantic denial of greenhouse gas. All this to do things Canada did not elect them to do !

The dear leader who abruptly shuttered the Kits Point Coast Guard, leaving a million Metro residents with no aquatic search and rescue service, is dead to me. Does he think that British Columbians will do an about face on our opposition to Enbridge scheme just because he throws a little money at our coast? Does he really think that money can make us change our mind, to mortgage our coastline, to risk our environment and the very way of life for the people who live there? He's insane!

Empty gestures like this will ring quite hollow when the inevitable deaths start happening because there was no Coast Guard to rescue a foundering pleasure craft on English Bay. Unfortunately it is only a matter of time.

Not everyone east of B.C. is a dim wit.

Anon, he doesn't need everyone. He just needs enough and, in Harper's electoral politics, 39% of 60% equals a majority.

That said, I have family and friends "back east" and it is remarkable about how little they understand about this business and the nonsense they have been led to believe. This is simply serving up those like them another helping of nonsense and a lot of them will go for seconds.