The Strongarming of Kevin Page 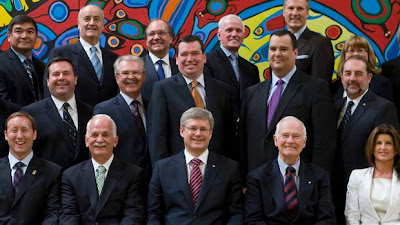 In the thug gallery that passes for a federal government today this shouldn't surprise anyone, least of all parliamentary budget officer, Kevin Page.

On CTV's Question Period, Page revealed the price he had paid and the intimidation he received from the Harper gang for outing them on the F-35 costs.

Page revealed that he came very close to quitting after the Harper government cut his budget by one-third and demanded that all of his office’s work be kept confidential.

“It definitely was intimidation,” Page claimed.

His five-year tenure, which is about to come to a close, was also marked by some highlights. He called out the government for drastically low-balling the cost of the F-35 fighter-jet program, only to have his estimates largely confirmed in a subsequent auditor general’s report.

Question Period also aired a clip of him telling Ottawa public-administration students that parliamentary watchdogs are under attack. He mentioned that the situation is the worst that he’s seen in the past 30 years.

Page is one of several officials who've been vilified or fired by the Harper government for questioning its decisions.

Thugs is the correct characterization, Mound. Page is one of the few courageous men left in Ottawa.

Thanks anonymous. I'll bet that's only a partial list of government abuse and intimidation.

This isn't a democracy. It's certainly not a society of laws.