Will Climate Change Drive Britain Back Into Recession? 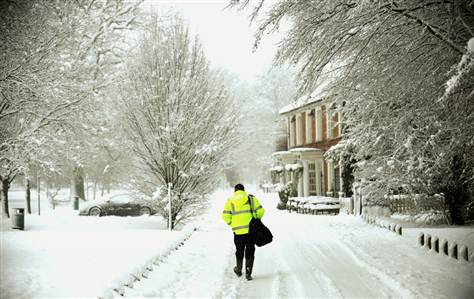 Britain's Tory government is hoping desperately to avoid a "triple dip" recession on its watch.   The Cameron government eked out a 0.1% growth for the three months ending March 1st, about as slender a margin as they come.

Recently, however, the British Isles have been plunged into a deep freeze that researchers are now attributing to atmospheric changes triggered by the loss of Arctic sea ice.   Now it seems the cold snap could plunge Britain into yet another recession, the "triple dip."

...amid reports of empty shopping malls, closed schools and factory shutdowns, analysts said the weather increased the chance that the fall in activity in the final three months of 2012 would be followed by another quarter of falling gross domestic product in early 2013 – thus satisfying the official definition of a recession.

Economists said the cold snap would affect takings at pubs and restaurants, while parents would have had to take time off work to look after their children when the schools were closed. Manufacturing firms were likely to be affected by disrupted supply chains. 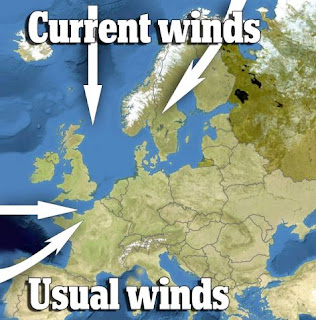 The outlook for Britain is anything but promising.  The U.K. deep freeze is expected to continue until the end of April.   April, Britain, freezing, really?  It's difficult to grasp the enormity of climate change in the U.K.   For centuries it's been a damp, soggy, mild sort of place save for the northlands.   Over the past two years it has gone from mega-drought to mega-floods to sustained freezing conditions across the length of the country.   Britain is not built nor is it organized for these conditions.  British agriculture, for example, is facing a crisis worse than the foot-and-mouth disease outbreak of 2001.

Farming faces a perfect storm. Appalling weather – 2012 was the second wettest year on record in England – has coincided with disease in livestock, including bovine TB and Schmallenberg in sheep, which causes birth defects. On top of this there are commercial pressures, with retailers driving prices down because of the state of the economy, combined with the cost of animal feed needed to replace poor quality silage due to the weather, shooting up by 40%. 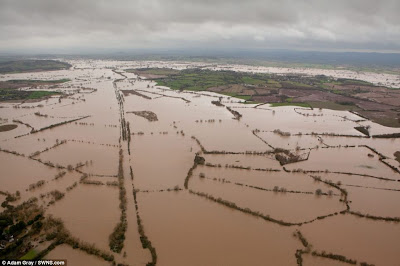 As a result, farmers are seeing incomes slashed. According to the Department for Environment, Food and Rural Affairs (Defra), some livestock farmers have seen incomes cut by more than 50% to only £14,000 a year, while dairy farmers have seen decreases of more than 40%

Britain should be a wake-up call for Canada and for all our parties, Conservative, Liberal and NDP.  If ever there was a time to reinstate the "Precautionary Principle" this surely must be it.

A triple dip recession would be the first recorded in Britain.  Wait a second, was the Black Death just a single dip recession?
Posted by The Mound of Sound at 8:01 AM