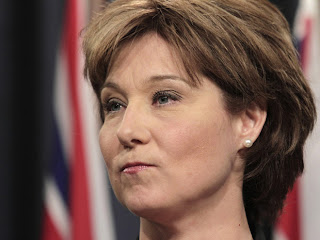 And I was hoping she'd survive long enough to run the B.C. Libs on the rocks in the May elections.

Having thrown most of her closest advisers under a good many buses, B.C.'s unelected, unelectable and outgoing premier, Christy Clark, is now pretty much on her own.   Even her caucus and cabinet are beginning to abandon her leaky ship.

But scandal just keeps coming Crispy's way.   Now it's the Information and Privacy Commissioner Elizabeth Denham's turn to savage premier Clark.   Denham has released a scathing report accusing Clark and her minions of governing off the record to escape scrutiny from freedom of information requests.

Denham said that while the Liberals are complying with FOI laws to assist the public, they have also shown "evidence of the practice of 'oral government.'"

"Without a duty to document, government can effectively avoid disclosure and public scrutiny as to the basis and reasons for its actions," Denham said in her report.

"The lack of documentation undermines the ability of citizens, journalists and the public to understand the basis for government’s actions on any particular matter."

The review, prompted by complaints, found that 45 per cent of all requests to Premier Christy Clark's office last year failed to find a paper trail of any kind.

...the government appears likely to let stall [Denham's] key suggestion for the province to change FOI laws and legislate a "duty to document."

Kim Henderson, deputy minister for the Ministry of Open Government, replied to the commissioner in a letter saying that while the government will "examine this recommendation," it will also suggest it go to a special committee for consideration.

"I note that no other access to information legislation in Canada has such a duty prescribed in law," Henderson said in the letter.

Denham said that committee meets only every five years and won't undertake any work again until 2016.

"I think that's a very long time away," she said.

The premier's office did not respond to requests for comment.

This premier and her whole rotten, corrupt government have to go.  It's no exaggeration to say they're thoroughly bent.

Rich Coleman says that "everybody's behind the premier," and true to form the budget passed 2nd reading 45 to 38. If only four of her trusting cohorts had shown the courage to stand up to caucus we might have been rid of Clark this week. But two months pay is two months pay I suppose.
Tick tock Christy, time is not on your side.

" accusing Clark and her minions of governing off the record to escape scrutiny from freedom of information requests.

.....they have also shown "evidence of the practice of 'oral government.'"

I dispute the use of the words 'governing' and 'government' in the partial quotes above. That is unless you call permanent campaigning, photo-ops, luxury junkets and shoveling public assets to your friends 'governing' or 'government.'