Anti-mafia detectives swooped on homes, offices, clinics and hospitals in Lombardy, the region around Milan, and elsewhere. A statement said the dawn raids were part of an investigation into "corruption linked to tenders by, and supplies to, hospitals".

Healthcare in Lombardy is the principal responsibility of the regional administration, which for the past 18 years has been run by Roberto Formigoni, a childhood friend of Scola and the leading political representative of the Communion and Liberation fellowship. Until recently, Scola was seen as the conservative group's most distinguished ecclesiastical spokesman.

But why should the Cardinals get all the fun?  The Guardian has a neat interactive page where you get to pick the next Pope.   They call it The Pontifficator.  See if you can spot the next Disciple.

I'm backing this dude, Cardinal Robert Sarah, because he looks way cooler than the rest. 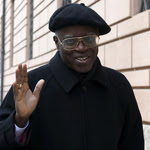 I'm going with George Pell. He's facing questions over his handling of priestly diddling, and he's ultraconservative on his views about women in the clergy, priestly celibacy (towards willing partners of legal age, I presume), contraception, and pretty much anything else that could drag Catholicism kicking and screaming into modernity...or at least into the Victorian Era. Hasten the demise, George, hasten the demise.