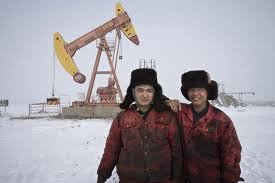 In the fiscally dodgy Athabasca Tar Sands it was really only a matter of time before the call would come to bring in cheap Chinese labour.   Still, it's a little surprising that the opening salvo, complaining about Canadian contractors, should come from a guy associated with Beijing's newly acquired Nexen before the ink is even dry on the takeover deal.

As oilsands firms struggle to contain costs while producing some of the world's most expensive crude, "fat, lazy and inefficient" suppliers and contractors will have to be replaced, oilsands leaders said Tuesday.

Four officials attending the inaugural Edmonton Network of the Association for Corporate Growth on Tuesday were critical of supply companies they say have not yet grasped the new business reality - the need to "wring the towel" and reduce both capital and production costs.


Joe Bradford, vice-president of joint ventures with CNOOC, the Chinese-based oil giant that recently bought Nexen Energy and their Long Lake oilsands plant, said while the purchase was a vote of confidence in Canada, operations here must compete with others in CNOOC's worldwide portfolio for future funding.

"It is a bit of a mystery to our people in headquarters, and to us here, as to why there has been such massive cost escalation in Fort McMurray with projects that have run hundreds of per cent over their initial budgets," he said.

"People have said it is because Fort McMurray is remote, but it is not remote to CNOOC. Northern Afghanistan is remote.


John Zahary, CEO of Sunshine Oil Sands, a firm with a majority of foreign ownership and huge oilsands leases, said external investors "find it mind-boggling and bizarre" that Canada seems to have such a problem building pipelines, and that companies are so challenged when it comes to controlling costs.

"When times are good our costs (for construction) doubled, and we need to fix that. We have priced ourselves out of the market before by having costs go up (think 2007 and 2008)," he said.

In other words, the Tar Sands have fallen into the trap Peter Lougheed repeatedly warned about.  Rapid, unrestrained development causes the local and provincial economy to overheat, driving up prices and essentially evaporating wealth.  Now the very people who drove the unrestrained development that overheated the local economy and drove up prices, the largely foreign-owned Athabasca operators, are complaining about the situation they created and demanding relief, as much from the current sag in heavy-oil prices as from high-labour costs.   Now they're leaning on government for more goodies.

Memo to Sideshow Steve - When you've dropped your drawers and you've put yourself over a barrel, what happens next is many things but it's not rape.
Posted by The Mound of Sound at 4:52 AM

There were two reasons Lougheed was kicked out of the Calgary Petroleum Club, Mound.

He spoke uncomfortable truths -- and he knew more about economic development than the oil barons did.

Stevie's whole existence is based on the oil sands and the well paying jobs to be had up there. Take away the well paying part and you have political disaster. Do they really think they can bring in en masse Chinese cheap labour?

Owen, the Conservatives (Alberta and Federal) have completely buggered up the Athabasca farce. Yet they've gambled so much on it they're afraid to face reality. The bitumen producers know this. They have Redford's and Harper's number. They know when they've got bitch to use.

When you're peddling the highest-carbon petroleum that's also the highest in costs to extract, upgrade, transport and refine, you're dependent on really high world oil prices to squeeze out any significant revenue. When those thin margins come under pressure all the leverage passes to the producers and they can easily demand that you let them import cheap labour from overseas.

And, yes, Anon they do really think they can bring in cheap Chinese labour. So do the Chinese. That's standard for their resource operations whether it be Asia, Africa or North America.

Along this line of thought, Mound, I strongly recommend Jeff Rubin's new book, The End of Growth, in which he has much to say about China's insatiable thirst for oil, as well as the long-term outlook for tarsands oil.

Rubin and Suzuki were on Ideas last night. The podcast is worth a listen.

We're a small client state fought over by America and China.

It doesn't have to be that way, but Steve Harper's imagination cannot see a role for our country beyond this fate.

Hey, Double Nickel, I'll try to track down the podcast. Thanks.

Chris, if we can't control the bitumen producers, what chance do we have of getting our way with the U.S. and China? We seem to have given away so much in chasing pitifully meagre royalties that are ultimately squandered. The Brits would call it "a mug's game."