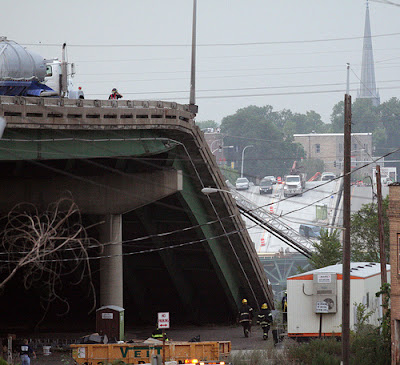 Barack Obama has unveiled plans for a multi-billion dollar programme to repair and upgrade America's decaying highways, bridges and other critical infrastructure.

Among his proposals were renewed calls for a $10bn "infrastructure bank." He also mentioned new plans for $4bn in loans and grants for infrastructure projects and tax breaks for foreign pension funds to encourage investment.

The president addressed America's "ageing infrastructure badly in need of repair" during his state of the union speech in February. The "fix it first" policy called for investing $50bn in transportation infrastructure, subject to Congressional approval.

Those proposals drew immediate fire from Republican rivals. House speaker John Boehner said: "It's easy to go out there and be Santa Claus and talk about all these things you want to give away, but at some point, somebody's got to pay the bill."

It's rich for a leader from the party that gave America a six trillion dollar migraine for failed wars of convenience in Afghanistan and Iraq to bitch about a few score billion being spent on infrastructure maintenance.   Just what does the Giant Orange Man think is going to happen to America's essential infrastructure if repairs aren't funded?   Still I suppose Boehner figures there are enough Americans too stupid to connect the dots that he's willing to play the "Santa Claus" card.

Yet the numbers Obama is talking about are paltry for a country that carries a defence expenditure of some 700-billion dollars a year.  It's a reflection of how Obama has never gotten close to evening America's keel.
Posted by The Mound of Sound at 10:21 AM

His plan is a drop in the bucket. It's Gazebos.

Obama's an embarrassment from the very start of his Presidency. He had a veto-proof majority congress, the public on his side, and he got barely anything, save his health law, done.

Now he makes pointless pleadings with Boehner to do not nothing, but next to nothing. Wow.

An excellent analysis of US deficits and debt;

"Federal deficits and debt have been sharply higher under President Obama, but the evidence continues to show that the Great Recession, President Bush’s tax cuts, and the wars in Afghanistan and Iraq explain most of the deficits that have occurred on Obama’s watch "


In a NYT article, ex Reagan budget director rips Repubs a new one;

"David Stockman, Reagan’s budget director from 1981 to 1985, slammed Bush and his former boss in an op-ed in The New York Times Sunday. Stockman argued in the piece that Reagan’s view on the deficit “created a template for the Republicans’ utter abandonment of the balanced-budget policies of Calvin Coolidge.”

“(Reagan’s deficit policies) allowed George W. Bush to dive into the deep end, bankrupting the nation through two misbegotten and unfinanced wars, a giant expansion of Medicare and a tax-cutting spree for the wealthy that turned K Street lobbyists into the de facto office of national tax policy,”


Stockman's words brought this to mind;

Next to nothing is pretty accurate.
There's not much good you can do with that trifle.

@ Anon. I remember Cheney telling Bush that Reagan showed that "deficits don't matter" to persuade Shrub to approve the second round of tax cuts for the rich.

I keep being reminded of a horrible photo I saw as a child, one I have never been able to erase from my mind. It was an old black and white photograph of a vivisectionist with scalpel in hand performing a surgical experiment on a dog. Even without the relief of anaesthetic, the dog was lovingly licking the hand of the monster savaging it.

Today we have groomed an army of the human equivalents of that vivisectionist's dog. Masses of people kiss the hands of those who betray them and steal their kids' future.

Although dark, that's an excellent example Mound. Extraordinary images and experiences burn into a person consciousness.

Stockman manages to summarize the current situation very well in his piece in the Times, as in this part;

"Soon Americans stopped saving and consumed everything they earned and all they could borrow. The Asians, burned by their own 1997 financial crisis, were happy to oblige us. They — China and Japan above all — accumulated huge dollar reserves, transforming their central banks into a string of monetary roach motels where sovereign debt goes in but never comes out. We’ve been living on borrowed time — and spending Asians’ borrowed dimes."

He provides background to Cheney's advice to Bush on deficits as well. It's an excellent, take no prisoners non partisan article, and a rarity in our times.

I would pay real money to attend an un-moderated debate on these issues between Stockman, Obama, Boehner, Harper and Justin. Throw in Mark Carney for baffle-gab entertainment value