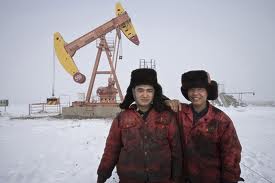 Gwynne Dyer explains the Chinese government's announcement of plans to introduce carbon taxes.   The motivation is the most powerful of all, fear.

Under the direction of the World Bank's top climate scientist, Sir Robert Watson, studies have been commissioned into how reaching 2 degrees Celsius of warming would impact agriculture in certain countries.   Dyer's source inside the company contracted by the World Bank to perform the assessments said the future is mighty grim for China.

The director told me the amount of food his own country would lose, which was bad enough—and then mentioned that China, according to the report on that country, would lose a terrifying 38 percent of its food production at plus 2 ° C. The reports were not circulated, but a summary had apparently been posted on the Chinese think tank’s website for a few hours by a rogue researcher before being taken down.

But if the report on China actually said that the country will lose 38 percent of its food production when the average global temperature is 2 ° C higher, it would explain why the regime is so scared.

No country that lost almost two-fifths of its food production could avoid huge social and political upheavals. No regime that was held responsible for such a catastrophe would survive. If the Chinese regime thinks that is what awaits it down the road, no wonder it is thinking of bringing in a carbon tax.

As Dyer notes, perhaps optimistically, the world will hit 2C within twenty five years.  But the scenario he depicts is plainly unrealistic.  China's and other countries' agricultural production will decline steadily over the next two decades.

The UN Food and Agriculture Organization last year declared our world had already entered a state of permanent food insecurity.   That will be an increasingly powerful driver of social unrest and failing states.  It has already played a considerable role in the still incomplete Arab Spring.

Still there is hope for some sort of international accord in 2015 but it won't be implemented until 2020 and it faces the likes of Harper who are intent on maximizing the extraction and sale of the heaviest-carbon petroleum before any international action intervenes.
Posted by The Mound of Sound at 10:13 AM