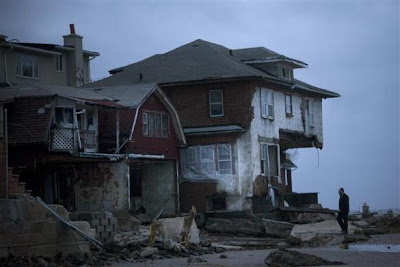 A new generation of home buyers, lured by low, post-hurricane prices, are moving in to coastal neighbourhoods devastated by Hurricane Sandy.


They may be on the losing end of a false bargain.   Another storm, even less devastating than Sandy, could send real estate prices in these areas straight to the seabed.   And a recent study found that, while Americans are alive to the sea level rise and storm surge threat, they're not interested in sharing the bill for costly sea walls and other adaptation measures.

It reminds me of a fellow I knew who fell onto hard times after a hurricane battered the Texas coast back in the late 80s.  He had built his dream, retirement house right on the spectacular waterfront.  Lovely place too.  Before he could move in, however, the hurricane hit, demolishing the house and sweeping the sand and what little soil comprised the lot out into the Gulf.  He lost his house and the lot that went with it.
Posted by The Mound of Sound at 9:41 AM