Updated - Why Stephen Harper Turned Canada's Back on Our Warming World 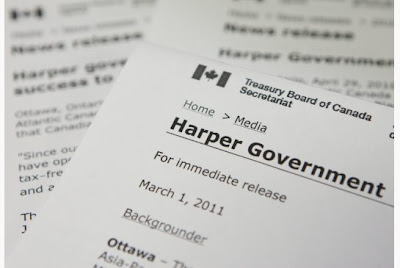 We're out.  The Harper government has pulled Canada out of the U.N. convention to fight drought in the world.

We're officially the only country to exit the drought agreement.  Every other nation remains a party to the convention.

We stand alone, supposedly because John Baird wasn't pleased with "the results" the group had achieved.   With a government as duplicitous and secretive as Harper's we can only guess at this government's true motives.  It certainly wasn't the trifling amount Canada was contributing to the effort.  For the period 2010 to 2013 Canada kicked in a whopping $283,000.

Canada signed the convention in 1994 and ratified it in 1995. Every UN nation – 194 countries and the European Union – is currently a party to it.

The UN body has a research committee dedicated to finding ways to stop the spread of droughts that lay waste to farmland across the planet, particularly Africa.

Scientists, governments and civil society organizations are headed to Bonn next month “to carry out the first ever comprehensive cost-benefit analysis of desertification, land degradation and drought,” says a notice from the United Nations Environment Program.

The convention is to tackle the growing problems of drought and desertification that are spreading worldwide.   But of course we wouldn't know anything about that here in Canada, would we?

Maybe to Harper it's just all part of that global warming extremism.  Haven't you heard?  The Earth has been cooling since 2000!  Ask any denialist.   Just don't ask people who actually observe, measure and record stuff - like facts.  They're run the numbers and found their predictions for the past 15-years have been spot on.   The broken line is what has been forecast and the red line is the actual results.   And, gee, that line is going up, just like they predicted. 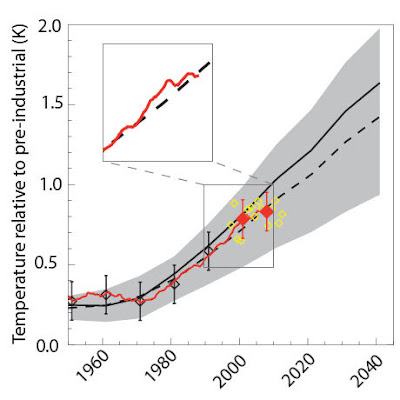 Now we know exactly why Harper pulled the pin on the U.N. drought convention:

The government’s decision to pull Canada out of the convention came just one month before a major scientific gathering to be hosted by the Bonn-based secretariat of the UN convention.

The meeting would have forced Canada to confront scientific analysis on the effects of climate change, droughts and encroaching deserts. The Harper government has been vilified an as outlier on climate change policy in past international meetings.

“Anything that they’re involved in that can lead to more evidence that we’re a planet in crisis environmentally they don’t want to be part of,” said Maude Barlow, head of the Council of Canadians and the author of a forthcoming book on global droughts.

“They simply do not want this information coming forward.”

Harper & Co. have made Canada a disgrace to the world community and they have disgraced all of us.   Their conniving secrecy and dishonesty reveals the depth of their loathing and contempt for our country and our people.  They are a collective abomination on our land.
Posted by The Mound of Sound at 2:03 PM

Once again, we have shown our arrogant disregard for the rest of the world. We are led by dolts who are mesmerized by their own navels.

Every morning I wake up hoping that the entire Conservative caucus has expired in a fire or a bus wreck or a plane crash or by an act of god.

Of course, we all know why Harper pulled Canada out of the drought program. Harper is fighting to, pedal his dirty tar sands oil. We all know the tar sands will speed up climate change, to a point of no return.

I think Harper has been kicked out of, many world organizations. We remember Harper embarrassing Canadians, in Durban, Davos and Copenhagen.

Harper's bizarre behavior, is going to become a tragedy, for the entire planet.

I expect there was a purpose for our withdrawal at this time. Perhaps the convention is reaching a consensus that Ottawa doesn't want to be seen as having to reject.

Drought, together with floods, are becoming two of the main scourges of climate change. The Third World, which has done so little to contribute to anthropogenic global warming but disproportionally bears the impacts, is beginning to talk seriously about damages and compensation from the major emitters. That's the sort of talk that a bitumen peddler would not welcome.

Putting one's fingers in one's ears and singing "la la la la la la la" is not a valid or thoughtful diplomatic response, except for Harpo. What he doesn't like he suppresses, or if that's outside his ability, he ignores it.

It was a great nation we had once upon a time. Every Canadian ought to be ashamed, and deeply deeply concerned.

Ask any "denier" about the climate you say? Maybe you should check your facts , http://www.dailymail.co.uk/sciencetech/article-2217286/Global-warming-stopped-16-years-ago-reveals-Met-Office-report-quietly-released--chart-prove-it.html

Maybe if the warmers could figure the sun into there models the would have some credibility.

Graham, here's a suggestion. Screw the Daily Mail. Go to the Met Office and find the assertion that's attributed to them by this rag. That's all you've got to do, Graham. It's really that simple. And then, when you've got that admission, be sure to forward it to the energy companies because they obviously missed it and it would mean tens of billions of dollars to them. Or did that not occur to you or to the Daily Mail? Logic and critical thinking must be a challenge, eh Graham?

"The British newspaper the Mail on Sunday and its writer David Rose are notorious for publishing misleading (at best) climate-related articles, as we have discussed previously here, for example. They have recently struck again, claiming that according to a "quietly released" Met Office report, global warming stopped 16 years ago (a myth which Skeptical Science debunks here and here). This assertion is entirely fabricated, as the Met Office explained by publishing David Rose's inquiry and the Met Office's responses."

Now, Anon, let's not tip Graham P. over the edge of his denialism nap.