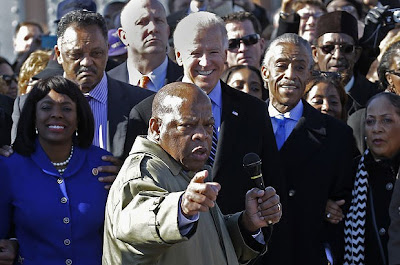 The rightwing stooges who control the U.S. Supreme Court might be willing to imagine away the reality of racial voter suppression in 2013 America but vice president Joe Biden took shoe leather to their warped fantasy yesterday in Selma, Alabama.

US Vice-President Joe Biden and black leaders commemorating a famous civil rights march on Sunday said efforts to diminish the impact of African-Americans' votes had not stopped in the years since the 1965 Voting Rights Act added millions to southern US voter rolls.

More than 5000 people followed Mr Biden and Georgia Congressman John Lewis across the Edmund Pettus Bridge in Selma's annual Bridge Crossing Jubilee. The event commemorates the ''Bloody Sunday'' beating of voting rights marchers - including a young Mr Lewis - by state troopers as they began a march to Montgomery in March 1965. The march prompted Congress to pass the Voting Rights Act, which struck down impediments to voting by African-Americans and ended all-white rule in the South.


Mr Biden, the first vice-president to take part in the annual re-enactment, said nothing shaped his consciousness more than watching TV footage of the beatings. ''We saw in stark relief the rank hatred, discrimination and violence that still existed in large parts of the nation,'' he said.

Mr Biden said marchers ''broke the back of the forces of evil'', but that challenges to voting rights continued, with restrictions on early voting and voter registration drives, voter ID laws where no voter fraud has been shown.

Jesse Jackson said Sunday's march had a sense of urgency because the Supreme Court heard a request last week by a mostly white Alabama county to strike down a key portion of the Voting Rights Act.

''We've had the right to vote 48 years, but they've never stopping trying to diminish the impact of the votes,'' Mr Jackson said.
Referring to the act, the Reverend Al Sharpton said: ''We are not here for a commemoration. We are here for a continuation.''

Joe can put his foot in his mouth. But there are times when he tells the truth with unambiguous passion.

This time he got it right.

I like the guy, Owen. Always have. His personal story is compelling.