Why Has the Arab Spring Failed to Bring Peace? 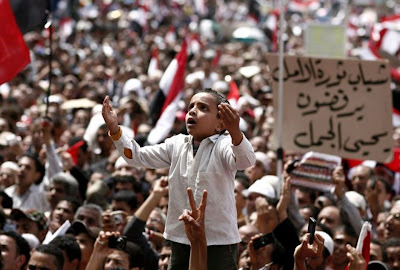 Unrest continues throughout the North African countries supposedly liberated in the "Arab Spring."  Nafeez Mosaddeq Ahmed writes that there is no peace because these uprisings have failed to address the environmental, energy and economic crises that sparked them.

We now know that the fundamental triggers for the Arab spring were unprecedented food price rises. The first sign things were unravelling hit in 2008, when a global rice shortage coincided with dramatic increases in staple food prices, triggering food riots across the middle east, north Africa and south Asia. A month before the fall of the Egyptian and Tunisian regimes, the UN's Food and Agriculture Organisation (FAO) reported record high food prices for dairy, meat, sugar and cereals.

Since 2008, global food prices have been consistently higher than in preceding decades, despite wild fluctuations. This year, even with prices stabilising, the food price index remains at 210 – which some experts believe is the threshold beyond which civil unrest becomes probable. The FAO warns that 2013 could see prices increase later owing to tight grain stocks from last year's adverse crop weather.

Whether or not those prices materialise this year, food price volatility is only a symptom of deeper systemic problems – namely, that the global industrial food system is increasingly unsustainable. Last year, the world produced 2,241m tonnes of grain, down 75m tonnes or 3% from the 2011 record harvest.

The key issue, of course, is climate change. Droughts exacerbated by global warming in key food-basket regions have already led to a 10-20% drop in rice yields over the past decade. Last year, four-fifths of the US experienced a heatwave, there were prolonged droughts in Russia and Africa, a lighter monsoon in India and floods in Pakistan – extreme weather events that were likely linked to climate change afflicting the world's major food basket regions.

The US Department of Agriculture predicts a 3-4% food price rise this year – a warning that is seconded in the UK. Make no mistake: on a business-as-usual scenario, this is the new normal. Overall, global grain consumption has exceeded production in eight of the past 13 years. By mid-century, world crop yields could fall as much as 20-40% because of climate change alone.

But climate is not the only problem. Industrial farming methods are breaching the biophysical limits of the soil. World agricultural land productivity between 1990 and 2007 was 1.2% a year, nearly half compared with 1950-90 levels of 2.1%.

The link between intensifying inequality, debt, climate change, fossil fuel dependency and the global food crisis is now undeniable. As population and industrial growth continue, the food crisis will only get worse. If we don't do something about it, according to an astounding new Royal Society paper, we may face the prospect of civilisational collapse within this century.

The Arab spring is merely a taste of things to come.
Posted by The Mound of Sound at 9:16 AM

It is particularly unfortunate that even as droughts reduce the availability of good ol-fashioned rainwater for crops, some important agricultural areas are using up the fossil water they have been unsustainably dependent on. Double whammy a-coming.

No question about that, PLG. There was an article in, I think, Harper's last year about the rapid depopulation of the Great Plains due to the draining of the Ogallala aquifer. I think they mentioned some 2,700 small towns now abandoned.

Hi PLG. I tracked down that article on the Great Plains. You can access it here if you're interested

This is an excellent effort and many of the points you address are simply not focused on enough. The Peak soil article, 3rd link from the bottom of your post, was / is especially significant and I believe few are aware of the issues addressed in it.

Here's a couple of links to do with diet and food costs around the world that some may find interesting,