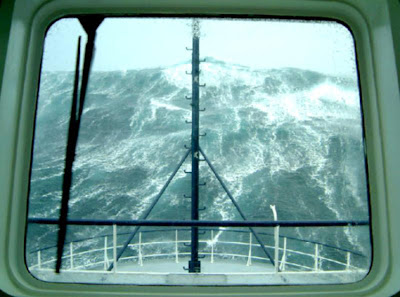 Harper, to the extent he thinks at all, thinks regular inspection of bitumen supertankers and a bit more aerial surveillance should put coastal British Columbians' concerns to rest.

Harper curiously doesn't know that the Hecate Strait is truly biblical.   The massive winds that tear at the place can actually part the waters, exposing the seabed.

"Under certain conditions, overfalls take the form of "blind rollers," which are large, nearly vertical waves that roll without breaking; not only are these waves virtually silent but, under poor light conditions they are also invisible - until you are inside them.  If one factors the prevailing deep-sea swell that in winter surges eastward through Dixon Entrance at heights of 30 to 60 feet [peak recorded 100 feet], and the fact that a large enough wave will expose the sea floor of Hecate Strait, the result is one of the most diabolically hostile environments that wind, sea and land are capable of conjuring up.

"Most sailors who survive storms do so because they orient themselves to the prevailing wind and waves, get into the flow, as horrendous as it may be, and ride it out.   But on a bad day in Hecate Strait, you can't get into the flow because there is no flow to be found, a 70-knot gust or an apartment building's worth of water can hit you from any direction.  There is no rhyme or reason; all around you the elements are at war with themselves."

This is true.  I know this to be true.  I have been caught in one of these storms, fortunately not the severest, but, even then, I felt certain I was a dead man. It's a sickening feeling knowing that there is no way to run for shore, to seek shelter, and you have just one option - to try to ride it out.   That takes a lot of power and a great deal of work at the wheel.   How would a heavily laden, lumbering supertanker fare in those conditions?  Is it really necessary to even ask?

We all need to work to ensure that this obvious reality actually has an impact on the corrupt cretins making policy in this country. (After having stolen an election.)

There is no place for reality in the Harperite mind, that increased inspections and surveillance is proposed to prevent spills is a clear indicator of that. WHEN the spill happens what then, pretend it didn't happen, hold a press conference to talk about it?

When I read what they were proposing, Thwap, it was obvious that this was a public relations gambit to make Canadians east of our coast believe Harper was serious about tanker safety.

These awful storms can come out of nowhere. The storm that caught me did just that. It went from sunny and glassy calm to raging seas in what seemed like mere minutes. The rapidity of the onset was itself scary.

@ Rural. When a tanker does go down there's not much anyone can do. The dilutent separates from the bitumen. The bitumen congeals and sinks. The Enbridge oil spill vessels can recover only surface oil, not sinking bitumen, and, even then, only in calm conditions. The tides, currents and storms through there will spread the bitumen over a wide area of deep seabed from which it can leech out carcinogens, heavy metals and other toxins for decades.

If that wasn't true the government could simply set up a demonstration tank filled with Pacific sea water. Pour in a few gallons of Athabasca dilbit and see what happens to it over 24 and 48-hour intervals. I can guarantee you it's an experiment they've already done in-house which is why they're not doing it before the public.

Ask any Newfoundlander about what ocean water can do and they will tell you. But who are Newfoundlanders...listening to them is not something the rest of the country does or s likely to stop and hear. Harper is such a stupid man and that is the truth.

Just wondering what you think of Black's idea to build a refinery and if there is a better, safer spot for tanker traffic than kitimat?

Anon 4:33, I'd like to take a shot at answering your questions.

The process of piping dilbit to Kitimat reveals the folly of Black's refinery deal.

Bitumen, even after being upgraded, cannot be transmitted by pipeline. It needs to be mixed with a volume of dilutents.

Dilutents arrive by tanker on the west coast and then have to be piped to Athabasca to be mixed with the upgraded bitumen to form a product called "dilbit." So you already have the expense, emissions and environmental costs of tankers, pipelines and transmission just to create dilbit.

Dilbit is still sludgy so it requires heat and high pressure to transmit it via reinforced pipelines from Athabasca to Kitimat. It's also full of corrosives - grit and acids - that eat through pipelines. When it spills it releases heavy metals, carcinogens and other toxins into groundwater, rivers and lakes.

Under Black's proposal, you have to ship dilutent east, combine it with bitumen, ship dilbit west so that he can then refine it to extract the dilutents/grit/heavy metals/carcinogens and acids in Kitimat.

Is there anything that strikes you as just a wee bit illogical to that? What if the whole dilbit operation was skipped? What if the upgraded bitumen was simply refined into synthetic crude on site, in Athabasca?

Extract it, upgrade it, refine it and then transmit easily pumped, relatively harmless synthetic crude oil to the markets. That would even add to Alberta's job base and revenues.

It's a no-brainer or is it? Ask yourself why they don't want to do that. The answer to that reveals the scam behind this whole business.