The Divisive States of America 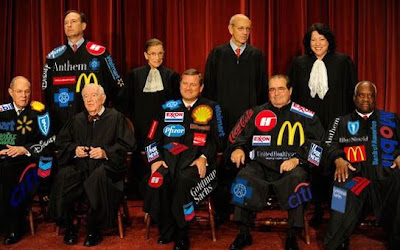 The future of the United States of America looks anything but united.   Government "of the people, by the people, for the people" is being dissolved to nothingness in a corrosive soup of corporatism, corruption and soaring inequality.

The America we once knew was a manufacturing giant that invented and made things for which world markets waited expectantly.   It was a nation that arose in conjunction with what was probably the most vibrant and robust middle class of any country.

That America was destroyed by rightwing charlatans like Ronald Reagan and his apostles who junked the manufacturing economy and put in its place an unstable and now rancid FIRE (finance, insurance and real estate) economy, the harbinger of any great nation's inevitable decline.

For three decades the American people have been subjected to a massive transfer of unearned wealth from the pockets of blue and white collar workers, today aptly called the "Precariat", directly into the offshore accounts of the richest of the rich.   As Nobel laureate Joe Stiglitz explains in The Price of Inequality, very little of this had anything to do with either merit or legitimate market forces.   Almost all of it was the work of a political class captured and harnessed into service of the oligarchs.

What has been done hasn't been achieved easily or without challenge.  It has been bolstered by a massively militarized economy, the world's only Permanent Warfare State, and the evolution of a police/surveillance state.  It is mind-boggling that a nation whose narrative is based on one word, "liberty," has been brought so low.

But to steal the economic and political vitality of the many and deliver it to the few can't be done by legislatures alone.   It takes the collaboration of an equally corrupt judiciary.   This, too, America has achieved.

The collusion between the forces of rank corporatism and the highest court in America came to the fore in the Supreme Court's decision in Citizens United.  Similar judicial assaults on blue and white collar Americans have been processed routinely through state legislatures and courts.

But, still, even with the serfs beat down, all is not well in the Land of the Rich and Privileged.   There's a new contagion on the horizon, one that could upset everything Reagan spawned - demographics.   America's white population is being overtaken by non-white Americans.   The U.S. may have stolen the southwest from Mexico but now Latinos are poised to begin taking it back.  And those blacks, why they're getting all uppity about their right to vote.   Fortunately for the most privileged white folks, a Neo-Confederate Supreme Court is standing guard.

If white rule in the United States is to be restored and sustained, then an important first step will be the decision of the five Neo-Confederate justices on the U.S. Supreme Court to gut the Voting Rights Act, a move that many court analysts now consider likely.

This green light to renew Jim Crow laws also would come at a time when Republican legislatures and governors across the country are devising new strategies for diluting the value of votes from minorities and urban dwellers in order to protect GOP power, especially within the federal government.

Some GOP-controlled states, which also have tended to vote Democratic in presidential elections, are now considering apportioning presidential electors according to these gerrymandered districts to give Republican presidential candidates most of the electoral votes even if they lose the state. [See Consortiumnews.com's "Return of Three-Fifths of a Person."]

On Wednesday, the five partisan Republicans on the U.S. Supreme Court showed they wanted to do their part in devaluing the votes of blacks, Hispanics, Asian-Americans and young urban whites.  So the key GOP juistices indicated during oral arguments that they are looking for excuses to strike down the heart of the Voting Rights Act.

Right-wing Justice Antonin Scalia shocked the courtroom when he dismissed the Voting Rights Act as a "perpetuation of racial entitlement," suggesting that the right of blacks to vote was some kind of government handout.

It's a simple fact that, whether legislator or judge, you cannot serve privilege and serve your country.   One will inevitably dominate the other and that is precisely what we're seeing today.

It is very difficult to see how this could possibly end well for America or the American people.   Will the right provoke an uprising that it can put down "on behalf of the people", its very own Reichstag Fire?