A Pig With Lipstick is Still a Pig, Not a Greyhound. 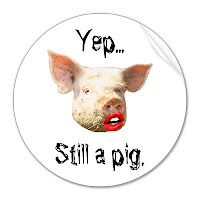 Stephen Harper is still intent on saddling the RCAF with the F-35 light attack bomber.   The so-called "reset button" that his government supposedly pushed to launch a full-blown fighter competition is being dismissed by some of Lockheed's competitors as a farce.

Here's the thing.   There won't be a valid competition without a fly-off that involves getting all the competitors up to Cold Lake to see how they each perform in various mission scenarios and against each other.   That's not about to happen - mainly because the F-35 probably wouldn't do terribly well.   That's mainly because it's not a fighter but a light attack bomber.  Just ask Paul Metz.

Metz was the lead test pilot for Northrop's YF-23 stealth fighter that lost to rival Lockheed's YF-22 Raptor in the American air force competition to become that country's air superiority fighter.   Fortunately for Metz, once the Northrop offering was knocked out of the running, Lockheed chose him to be its chief test pilot for the F-22.

Metz was interviewed - way back in 1998 kids (when you were still using fake ID to buy beer) - about what made the F-22 such a formidable fighter.   His explanation also reveals why the F-35 isn't much of a fighter.

"The decision to integrate the technologies of stealth, supercruise, super-maneuverability and sensor fusion was the result of significant advances in each of these areas in the 1970s and 80s. In particular, stealth technology had advanced to the point that high lift, high angle of attack aerodynamic shapes could co-exist with stealth requirements.

"Supercruise is vital to the entire concept of a stealthy fighter. Stealth alone does not make you 'invisible' , only very small. Speed confounds the enemy's problem by reducing the time allowed to detect, lock on, launch and have the missile or gun rounds reach your aircraft. Taken to its extreme, a fighter that could travel at the speed of light could probably survive on its speed alone. By the time you saw your speed-of-light fighter, it would be long gone. The F-22 has yet to conquer warp speeds but the high sustained supercruise speeds are a distinct advantage in evading the enemies weapons.

"The F-22's thrust-vectoring can provide remarkable nose pointing agility should the fighter pilot choose to use it. What is not widely known is that thrust-vectoring plays a big role in high speed, supersonic maneuvering. All aircraft experience a loss of control effectiveness at supersonic speeds. To generate the same maneuver supersonically as subsonically, the controls must be deflected further. This, in turn, results in a big increase in supersonic trim drag and a subsequent loss in acceleration and turn performance. The F-22 offsets this trim drag, not with the horizontal tails, which is the classic approach, but with the thrust vectoring. With a negligible change in forward thrust, the F-22 continues to have relatively low drag at supersonic maneuvering speed.

" Stealth, supercruise and supermaneuverability are the components of the pilot's 'chariot'.

Unlike its competition, the F-35 is not supercruise capable.   It is capable of supersonic flight in afterburner but at the penalty of massive fuel consumption which greatly limits its range.  That's a big deficiency for the interceptor mission. The F-35 also does not have thrust vectoring.  It already has a weight problem that has caused designers to remove vital safety equipment.  It is single-engine which leaves it vulnerable to ground fire, especially from shoulder-fired heat-seeking missiles.  This vulnerability coupled with fuel and weapon limitations leaves it a poor choice for the sort of ground support missions we flew in Libya and our allies provided in Afghanistan.

In other words, it's lame in the air defence role, in the air superiority role, and in the ground support role, all three main missions of a genuine fighter aircraft.   That leaves it with one mission - light attack bomber.

Which is why we won't be seeing the F-35 put through a fly-off competition.  The lipstick might come off.
Posted by The Mound of Sound at 1:28 PM

Why is the Canadian government so intent on shovelling billions of dollars to Lockheed Martin when other companies have superior fighters for sale at a fraction of the cost?

The answer to that question will solve the mystery.

There are several reasons driving this purchase, Anon. The Canadian Air Force types prefer American-compatible equipment. The F-35 is our admission ticket.

Stealth is sexy, to them anyway, or at least it was back when everyone else wasn't jumping into the game.

Obama cancelled one major Lockheed project, the F-22, very prematurely. The F-35 is Lockheed's chance to make good from that loss. The American government is really pushing its allies to go Lockheed.

The fact is that other aircraft, such as the Eurofighter Typhoon or Dassault Rafale, are also quite expensive. There really isn't anything available for "a fraction of the cost." It's a question not so much of cost as of value.

The alternatives are all what are called multi-role combat aircraft. They're designed to do the intercept, air superiority and ground support role of a modern fighter. They have supercruise and most have twin-engine survivability.

The F-35 is not much of a multi-role fighter. In fact it's a light strike bomber - no supercruise, single engine.

Why the F-35? WHY, in the face of so much negative information, is the Harper government so fixated on this machine?

Well, maybe because we are now a belligerent nation. We are NATO, not U.N. We are warmakers, not peacekeepers. We are Libya, not Cypress.

We are pro-corporate, anti-environment. We are pro-jesus, and anti-science. We are pro-monarchy, and anti-democracy. We are pro-small government (while expanding government), pro-fiscal responsibility (while taking a surplus and plunging it into deficit), pro-accountability (while cranking up the drawbridge and flooding the moat).

We are pro-law-and-order while lying, cheating and stealing. We throw single moms in jail while cutting Duffy a cheque.

Because it suits us, that’s why.

We are simply the target market for the americans, and were forced to keep locheed martin afloat with im sure some kickbacks or promises to those in charge. We are forced to buy all sorts from america(drugs, smokes, cars, the planes are just alot more money)

The warmakers are running out of customers in such nasty economic times and Harper is being fed something to get him to comply. I imagine this fits with Harpers grand meglomania, to be a top gun and have a seat at the big boys table:P
Why do I feel like the american industry captains and politicians probably are laughing all the way to the bank because Canada is now run by such a simple rube and all they have to do is rub his belly and feed his ego:P

Harper may think by purchasing the F-35 from US business corp, Obama may say okay to the pipe line.