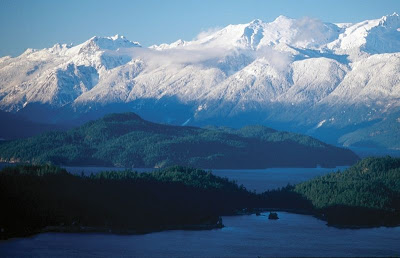 Perhaps for the first time in his reign our eastern ruler may be confronted by a province spoiling for a fight.

Most of the past dozen or so years can be seen as the golden era in B.C.’s relationship with the rest of the federation.
Former premier Gordon Campbell went to exhaustive lengths to maintain good relations with other provinces, especially Western provinces, and also with the federal government.

...But that was then, this is now. That golden era had already started to tarnish in the run-up to this election and, depending on the outcome of Tuesday’s vote, it could come to a complete end with much more of an us-versus-them mentality dominating B.C.’s attitude toward some of its key provincial and federal partners.

...While playing nice might get B.C. more in the long run, British Columbians have often rewarded past leaders who are seen to stand up for their province.
Given the positions of both Clark and Dix recently, they seem to be very aware of that reality.
The stakes are, arguably, higher this time, given the commercial importance of Alberta’s “landlocked” oil and the Western political base of the Harper Conservatives.

Fortress B.C.?  Sure.  Never in this province's history have the people had such good cause to feel imperiled and set upon by their distant, federal government.   Canada has morphed in to a petro-state and Parliament is full, on both sides of the aisle, with petro-pols whose only vision for the future entails sacrificing our coast and our way of life to peddle bitumen to Asia.

Ottawa wants to force British Columbia into submission, a state of  political occupation where the overwhelming view of the populace is suppressed and subordinated to the will of that distant authority.

We are confronted with a government whose henchmen have already dismissed the views of a solid and growing majority of our people as "extremist" and who have branded us as "inimical" (hostile to/enemies of) to Canada.   They have proclaimed our disagreement a "battle."   And now they're intent on political occupation of our homeland.

Any people subjected to occupation are moved to resistance.  Fortress B.C., perhaps, but only if Ottawa leaves us no other choice.
Posted by The Mound of Sound at 10:52 AM

Is that the same Smart guy who's married to communications officer and deputy press secretary for Premier Christy Clark mouthpiece BC Liberal Rebecca Scott?

Why yes it is.

Yesterday on CBC Calgary on the "Homestretch" show, an interview with a georgraphy professor James Burn from the University of Lethbridge took place. He and 11 other scientists have written a letter to Minister Joe Oliver questioning his pushing pipelines and the the expansion of the tar sands telling him renewables is where the Canadian Government needs to be putting money into. We have the lowest royalities in the world and nothing in the bank for the future. Norway has 6 billion in the bank for the future. Goverment is supposed to act for all of us. This government must recognize the problem with Global Warming. We must move to cleaner energy. You, the government are on the wrong track pushing fossil fuels and it is not a good investment for the furture...use profits from the tar sands to develop alternative green engery. We do not need to invest all our money on oil or coal.

Anon11:28, I don't know that's what he's saying. In fact I think he's probably quite accurate. We've been heading for a showdown anyway.

Hi Anyong. The letter was pretty widely posted in the mainstream media yesterday including The Guardian.

The Tar Sands revenues have been horribly mismanaged, particularly by the Alberta government. When you have a truly high-cost fossil fuel, you're vulnerable to energy booms and busts. When fossil fuel prices tank your product turns unmarketable. Redford herself has called it a "bitumen bubble."

Not only are they saving nothing but they're tying the province to a volatile and unstable revenue stream. In boom times Alberta suffers an overheated economy where wealth is basically boiled off and in bust times the province and its government become destitute.

One would have thought any government that brands itself Conservative would not act so rashly and yet they repeatedly do just that. Handing Athabasca royalties to the Alberta government is about as prudent as handing an alcoholic a bottle of rye whiskey for safekeeping.

Norway receives 80% royalties while Exxon gets 20%. Both the Canadian government and Provincal governments have been extremely lax when it comes to being paid for our resourses beginning with Louis St. Laurent. After the second world war he invited the US to begin business in Canada without being taxed. He was the first to say "Canada is open for business". That was the beginning of "thieft" of Canadian Resourses. Alberta is in financial trouble due to the fact they haven't had the back bone to demand just payment for resources. Why is the Alberta Government spending millions of tax payers money on going to foreign countries to drum up sales? That is the responsibility of the oil and manufacturing companies to spend their money do their own bidding. This system in Canada of always paying tax dollars to companies to keep them here has to change and it ought to have been done yesterday.

Unfortunately, Alberta needs foreign oil companies more than they need Alberta. They pay low royalties because, for Alberta, it's their way or the highway.

Extreme fossil fuels, such as bitumen or sea bed oil, is very costly to extract and yet it has to compete with cleaner, superior fossil fuels. Bitumen is a degraded product.

America is awash in oil and gas at the moment. I read yesterday that U.S. oil exports to Canada have tripled recently. That's oil, not bitumen. It's a distinction that Alberta politicians stubbornly refuse to recognize and it has lashed them to a "boom & bust" economic rollercoaster.

China will eagerly buy Alberta bitumen, essentially at a premium price, because China is looking for a strategic resource advantage that has a unique value to them. We first saw this in the brilliant and shrewd manner that China locked up Pacific Rim coal supplies.

But while China's appetite for bitumen remains high that is not enough for the Athabasca producers to lavish higher royalties on the province.

Unfortunately they didn't listen to Peter Lougheed and instead allowed hubris to get the better of them. Now they're saddled with unreliable, unstable and unrewarding mess of their own making. And they call themselves Conservatives.

There is only one word for this mess and that is stupidity. How short sighted are these people atall...makes one's stomach reach. You think they would go big time for alternative...but no...not they. I wonder how many hand wringers are wringing their hands at the moment while they think nothing of being forward thinking? Probably none.