Port Angeles, Washington resident Barry Swegle is a logging contractor and, you guessed it, he's got himself a dandy bulldozer.  According to town police, Barry just used that machine to settle some sort of  property dispute by demolishing two houses, flattening a pickup truck and snapping a power pole.   This is Barry's handiwork: 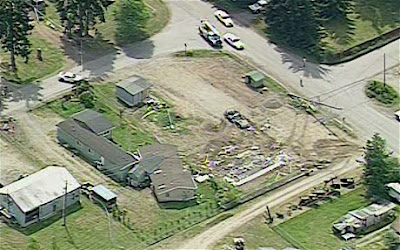 Police have charged Swegle with "malicious mischief in the first degree."  Mischief?   Yeah, sure.  That scrunched-up thing on the now vacant lot is the remains of the pickup truck.

"He just went nuts," Keith Haynes, who lives near the badly damaged homes, told the local Peninsula Daily News, "He took a skidder and took out two houses," he added, "I mean demolished."

Phil Riley, who also witnessed the destruction, said a property line dispute between Mr Swegle and a neighbour Dan Davis, whose property was apparently pushed off its foundation and into a neighbouring plot, "had been brewing for some time".
Posted by The Mound of Sound at 8:02 AM

A dispute over a property line? I suppose no one thought to simply hire a surveyor.

Sounds as though Squire Swegle didn't figure that was necessary.

At least he wasn't using guns!

What would happen to a woman if a woman did that? Anony 9:14 what kind of excuse is that for that kind of nutty behavior...he still did it.