UPDATED: A Trip Down Memory Lane - Remember When This Scandal Was All About Mike Duffy? 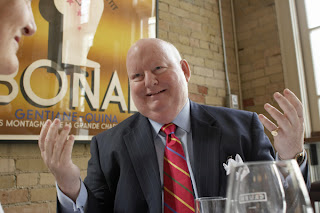 This began with a scandal about Mike Duffy and a cottage on Friendly Lane in Cavendish, Prince Edward Island.  Suddenly that seems like so long ago, an eon.

Now the scandal has shot straight up the food chain, ricocheting around the Senate and on into the PMO.  And the path is littered with the bodies - Duffy, Pam Wallin, Nigel Wright and now, seemingly, Benjamin Perrin, Harper legal counsel.   Now the scandal has kept on going, right into Mr. Harper's private office, right to his very throne.

Thanks to some dissident, insurgent if you will, probably from the ranks of Harper's own Parliamentary caucus, we have learned a lot over just the past week.   We have learned about a curious cash payment, secret deals, a laundered Senate report, and improbable, hopelessly feeble denials by a prime minister and his chief of staff reeling from the revelations that were never supposed to be.

We know a lot but how much really?   This whole Duffy deal was a potentially high risk business by people who are expert at understanding risk.   They knew what it would mean for them if their transactions ever surfaced in public.

There were no end of ways to get Duffy a paltry, for them, $90,000.  Why a personal cheque from Harper's chief of staff?  Why drag Harper's Special Counsel in on this?  Obviously there was a need to bring this "in-house", to keep it under wraps and that meant under the direct control of the prime minister and his top advisers.

Why the added inducement of rigging the Senate audit report, the promise that the report would "go easy on" the Cavendish Cottager?   That's a real "deal sweetener."  It's a promise to corrupt the workings of a committee of the Senate of Canada.   And now we know that is precisely what happened.

Duffy isn't and never was worth this risk.   No, very important people don't take these risks to bail out some lowly senator.  It's a pretty safe bet that they weren't doing this to protect Michael Dennis Duffy of Prince Edward Island.   This was about protecting Stephen Joseph Harper.  From what?  We don't know, not yet.  Maybe never.

Harper knows from experience that we're a dull and generally unquestioning lot with a collective attention span often not much greater than that of lesser primates.   And he knows that he's almost made it to summer, the season of scandal salvation.  He's betting he can hold his breath longer than we can and he knows from past experience that's not a bad bet.

Update - Well, there it is, the summer narrative.   Stephen Harper is sticking with "I didn't know".  Nope, he's outright indignant and has told his caucus that he's "very upset" with the conduct of people in the prime minister's office and some parliamentarians.  And now, kids, sorry but I have to run.  I have a plane to catch to Rio.
Posted by The Mound of Sound at 8:23 AM

Harpo can fulminate on ethics and accountability all he pleases. Until he is willing to engage the fourth estate I have no intention of paying him the slightest attention. His morning passion play of righteous indignation is not fooling anyone except perhaps the most gullible among his base. In the vernacular; whoever smelt it, dealt it.

Flying down to Rio huh? Give my regards to Fred and Ginger.

John Baird is on point in the HOC today and if you haven't heard, says they are not aware of any written agreement between Wright and Duffy.

Baird is uncharacteristically calm and polite too. No spittle!

Very interesting, Anon, since a copy of the letter of understanding, the written agreement, is suopposedly already in the hands of the Conflict of Interest commissioner. It suggests Baird, who obviously must know of the existence of the letter, is trying to build traction for Harper's claim that this was all done behind his back.

That and as CTV pointed out,

" The PMO also declined to release the letter of agreement, saying it is now in the hands of Ethics Commissioner Mary Dawson, who is investigating Wright’s $90,000 cheque to Duffy.

Dawson’s investigation could take a year or more."

BTW, MoS you know you've got a spam thing going on right?

Thanks for the heads up, Dana. I had no idea. Have you found any others?

Yeah but I can't remember where now. If it comes back to me I'll let you know.

Doesn't this come close to agreeing with what I said a few days ago could be one possibility and one to keep in mind as this unfolded that you thought was a bit of a reach? Certainly reads like that to me. I believe I did mention that I found the way Harper treated Duffy and the way Duffy acted like he enjoyed special immunity/protection to be a matter of some concern for the possibility that Duffy knew/had evidence of something that would be very damaging to Harper, and that it could have reached back to his days as a journalist especially since he had been the national political news editor for CTV. Whether Duffy got if before or after he became a Senator who knows but I agree with your supposition that Duffy must have something that Harper fears, this whole chain of events and the extremes gone to for Duffy make no sense otherwise, which was why I had raised that possibility the other day. The only explanation for this is that it was Harper being protected, and for these people to go this far in this matter whatever Duffy has must be incredibly dangerous for Harper, other CPC Senators who are also an image problem as Harper appointees aren't getting this kind of consideration, what makes Duffy so different? That really is the question isn't it?