But Would It Still be "Royal"? 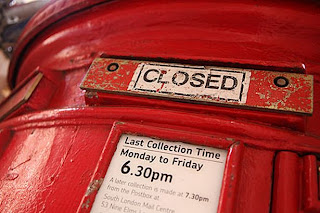 This is what can happen when Conservatives become too full of themselves.

Britain's Conservative government is openly talking about privatizing the Royal Mail, a crown corporation, and not just going private with it but selling it to offshore buyers.

[Britain's business minister, Michael] Fallon said the government would sell Royal Mail to sovereign wealth funds or other foreign buyers if postal workers' campaign against a flotation in London makes an initial public offering (IPO) on the stock market difficult.

He said numerous overseas buyers had already expressed "significant interest" in snapping up the 497-year-old postal service. "It's a great British brand with the Queen's head on it," he told the Observer. "We have already had quite a lot of interest in it."

He revealed that Royal Mail's boss, Moya Greene, had already embarked on a global roadshow promoting the postal service to sovereign wealth funds and foreign trade buyers as well as institutional investors based in the UK and overseas.

"Royal Mail have been testing investor appetite here, in Canada and the United States," he said. "There has been a lot of interest both at home and abroad."

Makes you wonder what Henry VIII, who established the Royal Mail in 1516, would make of the idea of it being sold to foreigners?
Posted by The Mound of Sound at 7:31 AM