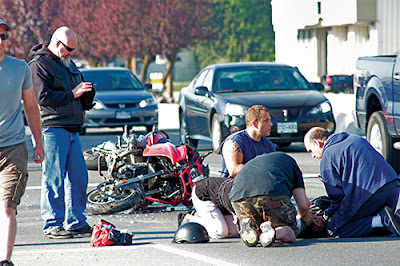 Late spring to early summer marks Dead Motorcyclist season.  It's the time of year when fatal encounters between motorcyclists and motorists are particularly apt to happen.

Many bikers are seasonal riders.  They put their machines away in the fall and over the winter and only get back on the road once the weather warms.  If someone is away from something that is skill-intensive for any extended period their skills will naturally degrade.  They won't be as sharp, as quick and probably not as alert either while they get into form.

Car and truck drivers experience something similar.   They're coming off a several months-long stretch in which motorcycle traffic is extremely light to non-existent.    They're not accustomed to looking for motorcyles, anticipating them.

And into this mix comes the "lethal left-hand turn."   You're in your car or truck and you're waiting for an opening in oncoming traffic to make a left hand turn.  You might have been waiting quite a while.  You might be frustrated, anxious.   You might be in a hurry to get somewhere.

Up ahead you see what appears to be a gap in the oncoming traffic, an opening in which you can nip through and make your left-hand turn.   You begin to key on the front vehicle to time your turn.  As it nears your foot comes off the brake and onto the gas pedal and you turn the wheel.

Only once you've moved off and are committed to your turn do you discover that the apparent gap wasn't an opening after all.   There's a vehicle there, a motorcycle that you hadn't noticed.  At this point there's probably not much you or the motorcyclist can do about it.  You're going to collide and there's every chance the biker will get the worst of it.  In fact this is the by far leading cause of motorcycle fatalities, the lethal left-hand turn.

The driver making the left-hand turn is at fault.  It's their responsibility not to enter oncoming traffic until they know the way is clear.  It's no excuse that they didn't see the motorcycle.

A lot of motorcyclists, while not strictly at fault, do little to improve their chances.   These days really low-slung bikes are quite popular.  The lower the machine the easier it is for the car or truck in front to mask it from oncoming drivers.  This can be made worse by riders who position their motorcycles in the very centre of their lane, in effect tucking their bike in behind the vehicle in front.  That can make it harder, even impossible, for the motorcyclist to spot the left-hand turner ahead.

For the next month or two especially, if you're waiting to make that left-hand turn across oncoming traffic, don't budge until you're absolutely sure that the gap that seems to be an opening is actually open.  Don't assume there's not a motorcycle in that apparent gap until you can see that with your own eyes.

Photograph - the accident shown in the photo above happened this morning just outside the Nanaimo airport at around 8:15.   The female motorcyclist was northbound.   A pickup truck was in the southbound lane, waiting to make a left turn.  The truck driver turned in front of the motorcycle and they collided.  The woman was airlifted to hospital in Victoria, her condition currently unknown.
Posted by The Mound of Sound at 1:24 PM

I always remind my friends in the spring to be aware of motorcyclists. I will never forget the time I was coming up to a line of traffic at a light and I was looking at the large truck ahead of me, when suddenly I realized that there was a motorcycle between us. Fortunately I was travelling very slowly, foot already on the brake and I probably didn't even get close enough to alarm the rider, but it scared the hell out of me. I was truly not seeing that guy!
And you're right, up here in the north there are no motorcycles on the road for quite a long stretch. We really do have to relearn to see them.

Karen, you're not alone. I have heard others describe the same experience. They tell of pulling up behind a large vehicle and at some point losing awareness of the motorcycle between their car and the truck. It sounds like some defect in our consciousness.

There are a couple of things the rider can do to avoid that problem.

When I must stop behind traffic at a light, I position my bike almost on the centre line between the stopped vehicles. If, for any reason, there's a problem with the vehicle approaching from behind that leaves me an emergency exit in the space between the vehicles in front.

The other thing is that, as the vehicle behind approaches, I turn my head and eyeball the motorist. I stare and let them know not only am I there but I'm keeping my eyes on them. It's amazing. They always stop an extra 10-feet further back. That way they don't have a problem and neither do I.

As a recently licenced (2 years) middle-aged rider, I really noticed the emphasis on defensive driving in both motorcycle testing (Ontario) and training.

The training has, I believe, made me both a more attentive car driver and understanding of why motorcyclists do what they do (and, sometimes, don't do - those damn turn signals!).

It wouldn't hurt for all drivers to have to take the motorcycle testing. I've had a few close calls in the 2 years I have been riding. As for the left-hand turns, I always approach a left turing vehicle with much caution - on my bike or in my car.

The other thing I have been noticing a lot lately is that, around here anyway, few bother to stop when exiting a driveway, parking lot, side street or country laneway. I has a semi (tractor only, fortunately) pull out of a farm right in front of me the other day. I was prepared, but he didn't slow down when exiting, or even look at all (he couldn't based on his angle leaving the farm). I was on my bike, but I could have been driving a semi myself and he still would not have seen me!

Always be super cautious when riding.

Smartest move you ever made, UU, was getting professional training. I began riding (and crashing bikes) at 15 but waited until I turned 50 to do the motorcycle safety course. What a welcome and invaluable eye-opener.

Since then riding has become not just a safer experience but far more enjoyable also. It's not enough to remain alert. You must also be aware of all the traffic around you in every direction and what they could possibly do in the next couple of hundred yards.

When you get a motorist who is close enough to present a problem eyeball them until you see they have eyeballed you. That's when you know you have their attention and they're not asleep at the wheel.

The one thing I really hate are dark tinted windows on the front side windows of cars. You cannot make eye contact with the driver. I never know if they see me or not (on a bike or in a car).

One more tip that I find helps, UU. There will be times where you run into problems you can't resolve. Sometimes navigating to another road is enough. Other times sitting down in a coffee shop is an enjoyable break and you'll find traffic conditions much better when you get back to the road.

If you're uncomfortable with your situation, stop for a while and it will change.