Coming Soon to a Bookstore Near You - "Rumsfeld's Rules" 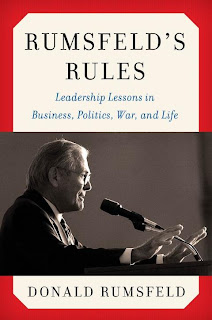 He's back.  Donald Rumsfeld has written a leadership guide entitled Rumsfeld's Rules that is being released today.  Wired has a review.

Who better to impart life lessons than the only defense secretary in U.S. history to screw up two wars at once? True to confident form, that’s what Donald Rumsfeld attempts in his new book on leadership, Rumsfeld’s Rules. He actually has good advice — so much that you really wish he would have taken some of it at the Pentagon.

“If you expect people to be in on the landing, include them in the takeoff” is good advice. “When negotiating, never feel that you are the one who must fill every silence” is great advice. “We cannot ensure success, but we can deserve it” isn’t exactly advice, but it’s the kind of thing that gets you fired up to ace that meeting or take that hill, which is probably why George Washington said it in the first place.

But then there’s the onslaught of irony that comes from any advice book written by a man whose name has become synonymous in defense circles with Epic Fail. “Those who think that they know, but are mistaken, and act upon their mistakes, are the most dangerous people to have in charge” is a pull quote in Rumsfeld’s Rules attributed to Margaret Thatcher. It’s also a serviceable epitaph for Rumsfeld’s tenure at the Pentagon during a time when the Bush administration elected to invade Iraq based on (to be charitable) mistaken premises, diverting resources from the war against al-Qaida, ignoring an incubating insurgency in Afghanistan, and ultimately mismanaging all three efforts.

When dealing with the press, Rumsfeld cautions, never put out misleading information. “During the Bush administration, we took care that the information we put out was accurate,” except apparently if it was about Saddam Hussein allying with al-Qaida or coming on the verge of a nuclear bomb or possessing stockpiles of chemical and biological weapons.

I don't see myself buying Rummy's Rules any time soon.  If, however, you do, please pass along some more of his bon mots.
Posted by The Mound of Sound at 11:27 AM

If you don't want to read the book, don't like his ideas and certainly don't like him, why would you want to hear what others have to say?

Whether I like his ideas is irrelevant, Anyong. Surely you understand that.

That quote from Thatcher is oddly apropos. Certainly sums up Thatcher's career.