Do You Trust the RCMP to Investigate the Duffy Scandal?

So we're going to let the RCMP get to the bottom of this senate expense scandal that now extends straight to the top of the Prime Minister's Office.

I wish that gave me hope.  It doesn't. 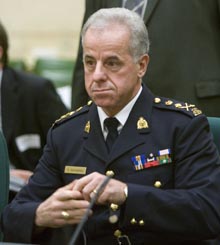 Ever since former and subsequently disgraced Commissioner Zaccardelli conjured up notions in mid-election of a phantom investigation that helped Steve Harper sweep the Martin government out of power, the RCMP appeared decidedly bent. 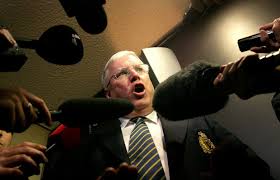 That worsened when Harper appointed the first civilian Commissioner of the force, a veteran Tory operative, Bill Elliott, who made a complete hash of the job until he too had to go. From Zac to Elliott, we come to today's Commish, Bob Paulson who was supposedly put in charge to clean up the force - just like his predecessors.   It will be Paulson's RCMP that gets to the bottom of the current scandal.  At this point it's time for a collective, "oh dear."

Paulson, you see, served notice that the RCMP was and remains the Royal Conservative Mounted Police.   He did this by circulating a directive to his top officers putting them on notice that just like the Harper armed forces and the Harper public service, the Harper national police agency is to consider itself sequestered.

And we're supposed to trust this outfit - that won't let even its senior officers communicate freely with our elected representatives lest that have "negative consequences" for the Harper government - to get to the bottom of this scandal?   With a predisposition like this, I don't think so.
Posted by The Mound of Sound at 8:18 AM

Institutionally the RCMP has been drifting dangerously close to becoming a state police force rather than a national police force.

It won't take much for them to go completely over the line at this point.

I wonder if the rank and file are willing.

Almost all my life the RCMP has been at that edge, Dana, except when it has actually crossed over the line. Remember the barn burnings in Quebec, for example?

We know far too little of their doings but what we know of the people who have been running that shop should give us no reason for complacency.