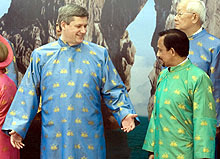 It turns out that the Chinese Communist leadership and the Canadian Conservative leadership believe in a lot of the same stuff.

They both want economic liberalism but political conformity and suppression of dissent.

China's leadership has now sent out a notice to crack down on the introduction and spread of dangerous Western values.

The Chinese government has confronted demands for democratic reform from activists emboldened by Mr Xi's vows to respect the law. In recent days, some activists have cited rumours that the party issued a warning against seven ideas that are considered anathema, including media freedom and judicial independence. But the official summaries did not include such language.

Officials must "fully understand the dangers posed by views and theories advocated by the West," said the account from Chongqing, which said they must "cut off at the source channels for disseminating erroneous currents of thought".

"Strengthen management of the internet, enhance guidance of opinion, purify the environment on the internet, give no opportunities that lawless elements can seize on," it said.
Reports on other local party committee websites in north-east and south-west China also described the directive, although in less detail.

The demands for ideological conformity show that Mr Xi and other leaders want to inoculate the public from any expectations of major political liberalisation, even as they explore loosening some state controls over the economy, several analysts said.

Do you think we don't have elements of these same pursuits within our government?  Both governments seek to advance ideological conformity.  That's the whole purpose behind Harper's secrecy and information control.  It is precisely why he has severed communications between the public and their public and armed services.  It is why he has transformed all branches of the government into his partisan political agencies.  It is why the Harper government hides in silence.

Harper's instincts are to control the internet, to curb media freedom and to undermine judicial independence.  Perhaps if he had his way, Harper would prefer to preside over Beijing on the Rideau.
Posted by The Mound of Sound at 11:12 AM