If We're Going To Do This With Drones, Why Does Anyone Need the F-35?

With the launch yesterday of the X-47B from the deck of the USS George HW Bush, the case for the F-35 just got a lot weaker.

The X-47B is a prototype of a U.S. Navy UCAV or unmanned combat air vehicle.  It's a stealth light bomber which is pretty much the same sort of aircraft as the F-35 only without the guy inside.

But don't you need a pilot to bomb an enemy target deep inside the bad guy's territory?  Nope.  The Americans have been using air launched and submarine launched cruise missiles for many years that fly ground-hugging profiles and hit their targets with great precision.  All you have to do with the drone is programme it to find its way back out.  It's a lot like a reusable, two-way cruise missile.

Now the defence-guys at Wired.com are suggesting that the XB-47 might just be the best option of laying a God-fearing whipping on those godless Chinese that we all know we're going to be bombing sooner or later.

And wouldn't you know it?  Guess who also seems to be fielding something along the lines of the XB-17?  Why the Chinese, of course. 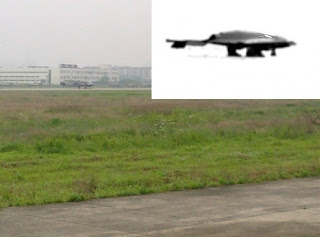